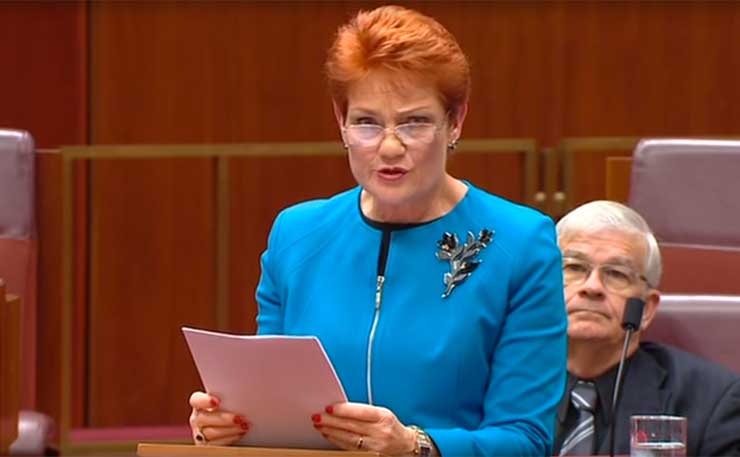 Pauline Hanson has today declared that Islam is a “disease we need to vaccinate against”, in a statement that appears to fly directly in the face of her outspoken comments against any and all vaccination just last week.

“We in this country must fight against the disease of Islam,” said Mrs Hanson to a crowd of supporters, “We must all seek to vaccinate ourselves against this plague. But more importantly still, we must learn to embrace the plague and push back against the rising tide of vaccination. Unless the diseases originate in Islamic countries. For these diseases are clearly another ploy from the terrorists to spread their … autism through … hallal snack packs … wait hold on I’ve got my cards all mixed up here. In any case we must stop these gay … Muslim … squat toilets from … buying all our houses. Yes, I think that’s right.”

Asked by a reporter whether her outspokenness against Islam was actually just a front for her long-running campaign for ethnic purity in Australia, Mrs Hanson said it was the ideas the religion represents that she opposes, and the fact that a large number of Islamic people are middle-eastern is pure coincidence. “I’ve got nothing against people of colour. After all I’m not a Xylophone,” said Mrs Hanson. “But I don’t think anyone could deny that there are a lot of things wrong with Islam. From their unwillingness to embrace other cultures, to their hatred of liberal values like gay marriage, this is simply a set of beliefs I cannot embrace.”

Mrs Hanson also pointed out that often the people criticising her of racism overlook the dangerous effects of unvetted immigration. “Look at the recent attacks in London for example,” said Mrs Hanson. “If immigration isn’t curbed in England, the number of homegrown terrorists like the London attacker may soon become an endangered form of terrorist. And we can’t let that happen. We have to make our terrorists great again, before the immigrants come and take their jobs away. Who’s with me!”

Mrs Hanson has since retracted her statements in support of terrorism, blaming the statement on a Malarial fever that she had picked up at the last anti-vaccine rally.