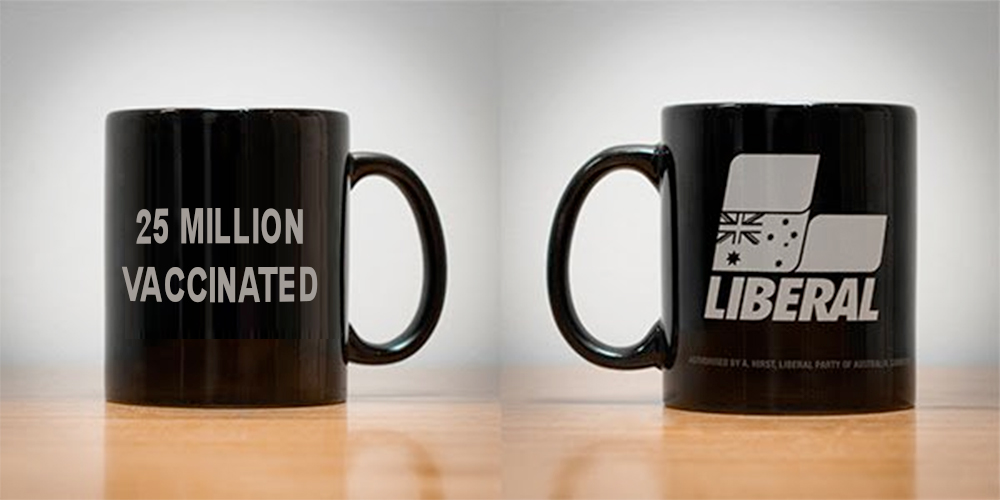 The Liberal Party has put up for sale a mug to commemorate the 25th million person in Australia vaccinated against Covid-19, which has happened next year.

Scott Morrison admitted the mug is similar in design to the famous “Back in Black” mug that went on sale to commemorate Australia going into surplus this year, last year. Mr Morrison still claims that the surplus, which was never achieved, was completely acheived if you just ignore the fact that it wasn’t achieved.

“Yeah, we had a few mugs left over, and so we decided to repurpose them to commemorate what I think is probably the singular greatest achievement of my government so far. Getting 25 million people vaccinated is a huge step in the fight against coronavirus, and it’s great that it’s already happened next year.”

Mr Morrison denied it was premature to announce that 25 million Australians had been vaccinated when the vaccine had yet to even be fully tested, and had not yet been cleared for release. “Look, I don’t have time to deal with these quibbles. I’m too busy to talk about things that have already happened in 2021. For me, that’s ancient history. I’m off to celebrate New Years Eve 2023.”