General News
The Chaser Guide to Having a Baby
January 19, 2018 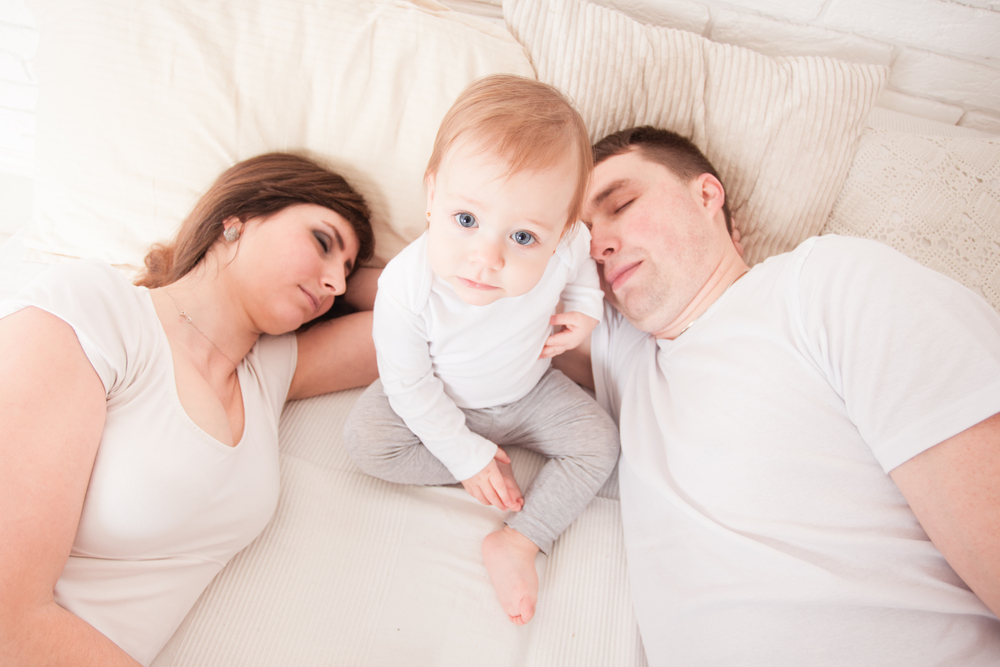 Now that Jacinda Ardern has had her baby, we thought we’d put together this guide to help people who are in the process of having a baby to reconsider, and perhaps do absolutely anything other than have a baby.

Starting a family can be one of the most satisfying things you’ll do in your meaningless life. However, usually it’s not.  If you’re thinking of having a baby, consider the following words of advice from new parents that we talked to while researching this article:

“Why the Fuck Would You Put Yourself Through THAT?”

Mistake One: Find a partner willing to procreate with you

This step is crucial. There are many excellent guides that can provide detailed information on making yourself attractive to the opposite sex, so we won’t go into this step in any great detail here, but it will probably involve a complete overhaul of your personality, and lying a great deal, both to your prospective partner and to yourself. This is one of the many, many, many sacrifices that you have to be prepared to make along the way. But remember – keep your eye on the prize: a screaming, shitting, vomiting clump of nerves that depends on you 24 hours a day for its very survival, and who is protected by a fiercely enforced set of laws that make it a crime to abandon it, even for a single night out at the pub, EVEN IF you get home before 11pm.

But back to finding a partner. After you’ve convinced someone to talk to you, you then have to convince them to settle for you for the rather than all the more attractive people that they’ve been out with previously. Even the ones that they ditched, and who they might be able to stitch things up with. The best way to do this is to continually undermine their self-esteem with phrases that seem to be supportive but are actually deeply insulting. Such phrases include: “I like older partners: you’re much more mature than everyone else I’ve been out with”, “Don’t worry, everyone’s metabolism slows down as they get older” and “I saw your ex-partner yesterday: gee the woman he was with was young”. If none of these work there is one phrase that will make every woman immediately go out with the nearest man: “Your biological clock is ticking”.

If your prospective partner is a man and the above phrases do not work, simply hold out the possibility that you might be amenable to an open relationship down the track without being too specific, so that you can deny it when it’s all too late.

With repeated application of seemingly well intentioned, but esteem-damaging phrases, over time you should be able to convince the person who initially went home with you simply because they got drunk one night, to settle for you, and over time they will come to suppress all desire for a better life. Which is a crucial state of mind to be in before you embark on having a baby.

Mistake Two: Decide to Have a Baby

While The Chaser Guide to Having a Baby would never condone lying about contraception in the relationship, it has over many generations, proved to be by far the most effective, efficient way to achieve the goal of bringing into this world a creature that, for the first twenty years of their life, will, with an efficiency that makes Bernie Maddoff look like an amateur, drain you of all the money that previously made your miserable work-life at least bearable, and then proceed to ignore you throughout their twenties, until they make the same mistake as you and need you to look after their screaming, shitting, vomiting clump of nerves.

Lying about the extent to which you have remembered to have the pill in the last few days saves the grinding process of sitting down and working through the issues involved in deciding to have a baby.

If however, you decide to have that conversation it is important to go into the conversation with some basic ground rules. For a start, make unrealistic assumptions about how easy it will all be. For men, this involves assuming that, while hard, it will be possible to be productive at work on 45 minutes sleep per month. For women, you should briefly embrace the idea that being a stay at home mum will be a great “change of pace”, and delude yourself that it won’t permanently undermine your status at work, and then comfort yourself that all your friends have ruined their careers with similar moves. While working through these issues it is important for men to agree to a token amount of commitment to become the primary caregiver “as soon as the baby stops breastfeeding.” Note that at this stage, if you’re a man, you should make as many promises as you like, even if you don’t intend to follow through on any of them. Once you have a child, both sides will realise just how naive they were being, and all commitments will be jettisoned and replaced with tired, incoherent arguments that don’t go anywhere and end with a mutual reassurance that both sides love each other “despite everything.”

Do not bother discussing the inevitable impact that having a pineapple-sized human being ripped through the woman’s vagina will have on your sex life. That is the least of your concerns. Unless you are lucky enough to have a child who for some reason spends most of the first year of its life in an humidicrib at the hospital, the concept of having romantic time with just the two of you will be become as foreign to you as it was when you were single. Except that when you were single, you at least got to sleep in. Note that once this happens, comfort yourself by saying to close child-less friends who inquire about this sort of thing because they haven’t yet been duped into making the same mistake as you, that although there has been “some” impact on your sex life that it has brought you together in so many other, more meaningful ways (cue: holding each other’s hand, smiling briefly and then having a muted argument about who’s turn it is to change the nappy).

Once you have decided to have the baby, it is a simple matter of conceiving which can take anywhere between thirty seconds and thirty years. While some people claim that it is important not to get too stressed if you don’t conceive in the first few months, keep in mind that it is possible that one, or even both of you, are infertile, and that nature is trying to intervene to prevent you from making the biggest mistake of your life. Note, however, that if this is the case, the urge to defeat nature can become so overwhelming that people will volunteer to adopt one of these screaming, shitting, vomiting clumps of nerves, and thus are, for the rest of us, the one remaining get out of jail free card, and should, under no circumstances, be encouraged to listen to nature.

Mistake Three: Have the Baby

There are few things in life more simultaneously horrifyingly traumatic and joyous as labour. There are many, many, many guides to childbirth, all of which you will buy during the pregnancy, so we will not go into it in any great depth here, except to say that it is extremely important for the man to recognise that for the first time in their lives, there is absolutely no way for them to make themselves the centre of attention, no matter how stoic and reassuring they try to be.

Just to repeat, the men are, to the surprise of many of them, not the main part of this process. That’s right. It’s not about them. Not even a little bit. And there is very little they can do to change that. This is why it is important, after the birth of their first child, for men to quickly re-enter the workforce and recommit themselves with renewed enthusiasm to maintaining and strengthening the patriarchy. That way they can assure themselves that they do matter in some way, even though they are completely secondary in the one crucial activity that reproduces the entire human race.

There are many ways to strengthen the patriarchy, but participating in an all-male comedy group and then writing a guide where the entire step about childbirth is about the man, is a good start.

Mistake Four: Look After the Baby

If you’ve made it to step four then you already realise what a terrible, irreversible mistake you’ve made. For this step, you will need to be comfortable with stripping your life of all pleasures, replacing your old friends with a series of insipid, shallow relationships formed with irritating people you meet through your mother’s groups and eliminating any spontaneity you previously enjoyed.

It is important for your own sanity to set yourself achievable goals each day. Planning is the key. Say you would like to read the newspaper on your own over a cup of coffee. All you need to do is to plan, and within six to nine months , you’ll have the half hour off that you require to complete this task.

Reading the newspaper is a big ask, and so perhaps in the first five years of a child’s life it would be best to set a more achievable goal, such as having half an hour of guaranteed, uninterrupted sleep. Again, planning is the key. First of all apply for an insulation grant from the Federal Government’s Insulation Rebate scheme. Second, change the baby’s nappy. Third, buy insulation batts from an approved vendor. Next, change the baby’s nappy again. Then, install the insulation batts around the walls of your baby’s room. You will need to pause occasionally to change the baby’s nappy. Next, pick up your baby and hand them to your partner. Then, walk into the baby’s newly insulated room, close the door, and then shout out as loud as you like “Why On God’s Earth Did I Do This?! What the FUCK am I doing with your life?!!” and then curl yourself into a ball on the floor, and sob yourself to sleep until your partner wakes you half an hour later because the baby’s nappy needs changing and “all the stuff to do it is in the baby’s room”. Hey presto, congratulations, you have achieved your goal of half an hour of uninterrupted sleep.

Having a baby is a big decision. Ultimately, it’s up to you to work out how to manage it, but if there is one piece of advice that every new parent agrees on it is this: DON’T DO IT. BACK OUT NOW, WHILE YOU STILL CAN.

This article is the first installment in a series. Stay tuned for next year’s Chaser Annual special guide to parenthood entitled “The Chaser Guide to Extracting Yourself from Parenthood” or “Denying Their Yours: How One Couple Got A Proper Night’s Sleep with One Life-Changing Phone Call”

This article originally appeared in The Chaser’s Guide to Bad Parenting. Buy it here.

The Chaser's Guide to Bad Parenting ($12.95) is available now.
Buy it online at ChaserShop.com or even better subscribe to the Chaser Quarterly.