National
Top 7 Times Scott Morrison fucked up and then lied about ‘not being warned’ before hand
August 19, 2021 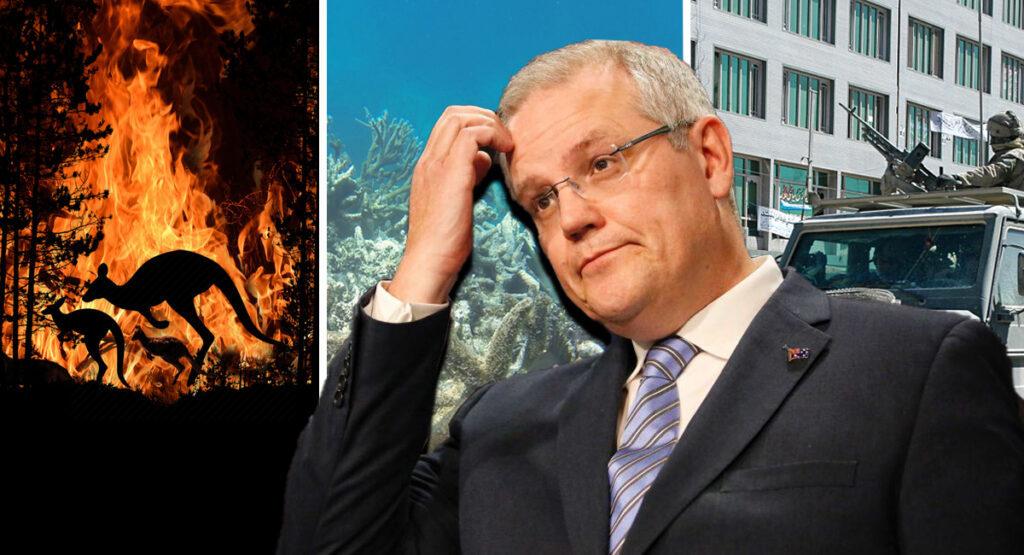 Prime Minister Scott Morrison is known for his tomfoolery and slapstick comedy, but occasionally he does go into more traditional satire mainly playing with the writing convention of making himself the punchline by letting his ego get in the way of doing what needs to be done in a Seinfeld like caricature of a dumb-fuck politician. Here at the Top 7 Times Scott Morrison has been warned about something pretty obvious and ignored the advice only to fuck up then deny ever being warned:

Easily the smallest mess up on this list, Sports Rorts was a scandal where the government took over $100m in taxpayer money aimed for regional communities and used it to try buy votes in marginal electorates. Despite evidence of his department knowing it was happening, he got up there as a leader and gave the entire country an explanation by just saying ‘yeah nah, she did it all by herself’. While it was a rookie response compared to performances he has given later in his career, his early work definitely a sign of techniques yet to come.

6. Covid-19 being difficult to deal with and vaccines being tricky to get

A long and continuous blunder, Morrison’s covid-19 response has been a non-stop campaign of ignoring basically every single person who exists. Everyone knew covid-19 was going to be tough to handle, except for Scotty. The best example of his comical disregard for stuff that everyone knows was when Kevin Rudd had to step in to suck up to rich people so we can get Pfizer vaccines because apparently life saving medicine was the one time the PM didn’t feel like sucking up to rich people. Before that it was assumed that embarrassing yourself to kiss the ring of rich people was the only thing he was good at.

The historically devastating bushfires were an unpredictable natural disaster according to Scott Morrison, however if you ask the former fire chiefs who tried to warn Scott Morrison that the fire season was going to be way worse they would obviously have a different answer. The biggest proof that he ignored their advice is not that he didn’t prepare the way they suggested, it’s that he waited so long to fuck off to Hawaii, he would have left as soon as he took in the information that a crisis was coming.

4. The UN planning to add the Great Barrier Reef to the Endangered List

Speaking of climate inaction, the Great Barrier Reef which has been dying for years caused a lot of controversy this year as the UN tried to disgustingly list the endangered reef as ‘in danger’ in a move they had literally been signalling for years and offering to help pay for. But according to the LNP who, alongside the Queensland government, have done fuck all to protect the reef in recent years and are actively hurting it by opening coal mines near it; Australia was ‘blindsided’ by the move.

However unlike the other entries on this list this tale has a happy ending as due bipartisan lobbying on behalf of tax dodging coal companies, the UN decided not to intervene to save the reef or declare it officially ‘in danger’ meaning it’s fine. To think we almost had an emergency on our hands but now we have an opportunity, soon we could sell ‘Great Barrier Reef Bleach’ straight from the source. Like fancy water companies that say they are from specific areas, but for bleach!

3. Parliament House’s lack of protection for women in the workplace

While the lack of any protection for women in the workplace at Parliament house was a shock to many this year, none claimed to be more shocked than Scott Morrison. The man was absolutely stunned as allegations of despicable and disgusting acts against women at work in parliament house came to light, years after the information was at the very least made available to him and to the previous PM Malcom Turnbull.

However the biggest indicator to pre-emptively warn the PM was the report that came out in 2020 with recommendations about addressing issues of sexual harassment which he didn’t implement since that was before he needed his wife to explain whether rape is bad. Also when you are in charge of parliament house it would pretty hard to not notice the lack of a hr department, how the fuck is there not a HR department would be most people’s question first day on the job.

2. The Taliban’s resurgence and the need to help refugees stuck in Afghanistan

A recent blunder years in the making this one. As the Taliban regains control of Afghanistan and tens of thousands of refugees are unable to come home, the Prime Minister has been stumped as to how Trump’s deal of ‘we pull out our troops and you just stop doing bad things or we might considered using harsh words’ somehow fell through. Who could have possibly predicted if we do fuck all to bring refugees including the translators who were crucial for our troops and became enemy number 1 for the Taliban in the process, we would be putting their lives at risk? Besides Bill Shorten, in parliament in 2018 when he asked why Au Pairs can get permanent visa’s but war hero refugees can’t. Which is a silly question for Bill to ask because we all know why our government hates refugees.

1. Telling Kyle and Jackie-O about the pants shitting story

Last and worst of all, Scott Morrison bringing up the Engadine Maccas story on Kyle and Jackie-O’s radio show. I will not be linking to this disgusting act as no human should be made to sit through that show, but especially not when the PM is on to talk about shitting himself. Not only is that obviously an abhorrent thing to talk about on the radio, but he was told not to by Kyle Sandilands himself during the interview. While normally it would be perfectly understandable to ignore anything Kyle Sandilands says, in this occasion Scott Morrison fucked up so badly here that even Kyle Sandilands was on the right side of history for the first time in his life. He may claim he didn’t shit his pants, but he did shit the bed that interview.

So, what did you think of list? Let us know and don’t forget to share it to your friends as a way to distract from the existential dread caused by lockdown, by giving them another existential dread to worry about instead!