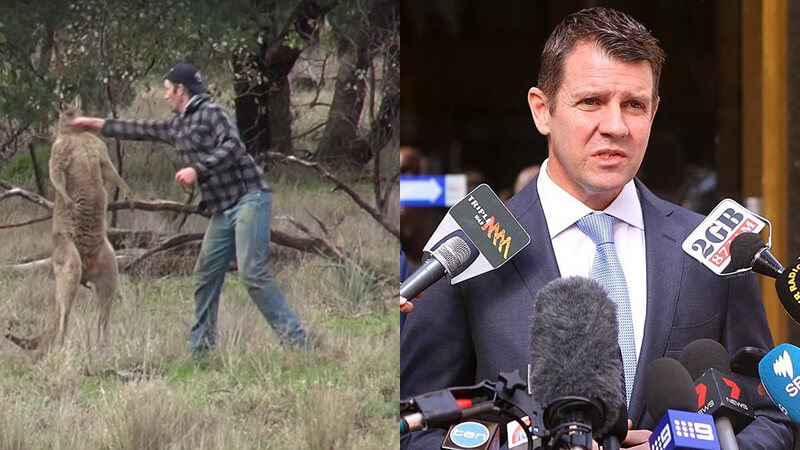 FOLLOWING the viral spread of a video that shows a man punching a Kangaroo in the face in Condobolin, Central NSW, Premier Mike Baird has instituted mandatory minimum sentences for anyone found guilty of physically assaulting native wildlife, effective immediately.

Greig Tonkins, who works with animals at Western Plains Zoo in Dubbo, could face up to 20 years in jail for his ‘cowardly’ punch under the state government’s new laws.

“People have complained that my CBD lockout laws are driving the violence further west, but I had no idea just how far until this,” Baird said at a press conference.

“To see this man go toe-to-toe with a defenceless animal that also stands proudly on our nation’s coat of arms was outrageous. I mean if he wants to shoot it as part of our state’s ‘Kangaroo Management Program’ or load up on a bunch of Kangaroo steaks at his local Woolworths then fair enough, but to punch one? Unacceptable.”

“How are we supposed to maintain our image as the most over-reactive state government in Australia if we don’t once again act immediately and without proper consideration?”

“The next time someone wants to king-hit a Kangaroo or do some MMA on an Emu, this law will make sure they think twice, or at least drive over state lines before they do it.”

When asked what he thought of the fact that Mr Tonkins only engaged the animal to save his dog, Baird was unrepentant. “If it’s not a greyhound, I don’t have to give a shit.”