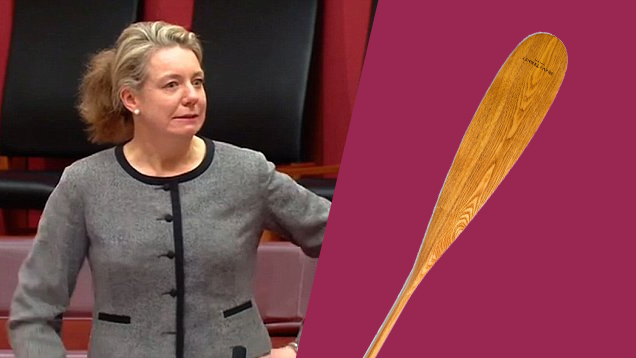 The Mosman Rowing Club has today donated one paddle out of their $650,000 annual surplus to assist the Minister for Slushfunds Bridget McKenzie who was this week caught doing exactly what you’d expect a National’s leader to do at this point if we’re being honest.

“Look I don’t know what you’re all complaining about,” McKenzie told critics calling for her resignation, “I haven’t shagged a single staffer and I haven’t given out a single dodgy water contract, frankly on the scale of things a little fiddling with the books to win an election is an improvement on past Nationals leaders.”

However, the public were not convinced with local sporting bodies concerned this would become common practice if an example were not made of McKenzie. “If she get’s away with this, what’s next?” asked one concerned community member. “MPs handing out free visas to their mates nannies? Ex-politicians setting up software companies that mysteriously win all the government contracts and then use the money they earn to donate back to the party that awarded the contracts? Coal lobbyists being given senior staffing positions in government, and retiring government ministers given lucrative jobs on the boards of coal companies? Ex-Prime Minister’s chiefs of staff being given prime-time TV slots by an international propaganda network set up by a billionaire who openly seeks to skew elections? MPs rorting travel entitlements to book helicopters to private fundraisers or personal holidays? Senior ministers holding back evidence from AFP corruption enquiries? Ministers being given free holidays by travel companies only weeks before awarding that same company a billion dollar government contract? Prime Ministers awarding multi-million dollar environmental grants without oversight to small companies with no previous track record in the field? Ministers charging thousands of dollars in entitlements for their internet bills despite internet costing far less, and only being asked to pay the money back after being caught? Deputy Prime Ministers campaigning for ‘traditional marriage values’ while secretly cheating on their wives with a staffer, then getting the staffer pregnant, covering it up to win an election, and then denying being the father? Ministers awarding multi-million dollar contracts to shady beach shacks in the Cayman Islands which may have links to their family members? The government awarding $30 million to a private media company that actively endorses them to broadcast sport instead of the national broadcaster which was already doing that, and then not requiring any accountability about where the money was spent? Ministers giving $500,000 to a private rowing club in a marginal electorate despite that club already being $120,000 in surplus? Ministers giving out a $2.2 million contract intended for health services in remote communities without tender to an organisation linked to an ex-party candidate despite the company charging twice the market rate? Ministers faking financial documents to smear a political rival and refusing to admit it when caught. Or maybe party members rolling a sitting Prime Minister because his actions weren’t pleasing a billionaire newspaper magnate and some of his mining friends. God, could you imagine living in that world?”

“Thank god we have a Federal ICAC to deal with these things.”