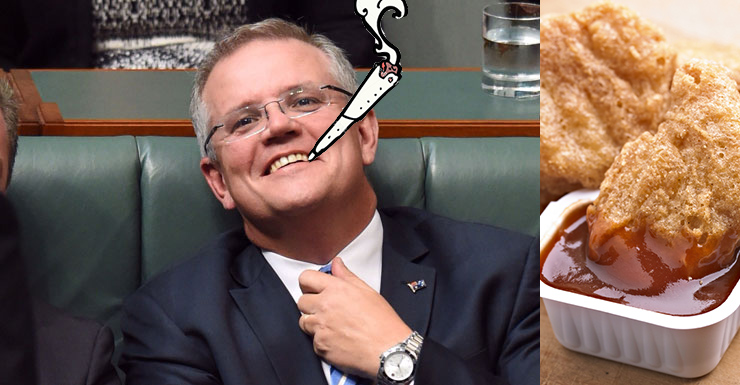 AS chronic pain sufferers and stoners around the country rejoiced at the announcement that medical marijuana would be easier to obtain in Australia, reports have emerged that the Turnbull government are already considering a tax on chicken nuggets, Nutella and other renowned ‘munchies’ to help the next federal budget.

“This decision is going to help thousands around the country who suffer chronic pain,” said Treasurer Scott Morrison. “Unfortunately it’s also going to be abused by bogans and the youth who’ll be inundating doctors rooms around the country, faking seizures and complaining about migraines. It’s just like Centrelink.”

“The biggest winners from abuse of the system will be the multinational corporations… like McDonalds and KFC. It’s time to implement a tax – not to help curb obesity but to maximise state profits.”

If approved, the tax will see a significant increase in the price of fast food, Nutella, eye drops and bubble wrap, among other items.

“So you’re telling me 24 nuggets from KFC are now going to cost me as much as a packet of smokes? That’s outrageous. I might as well be dipping my durries in sweet & sour sauce. Actually…”

“If they jack up the price on Nutella I’m going to have to start buying the cheap Coles imitation shit! I’ll just have to get so baked I can’t tell the difference. That’ll have to be pretty baked though.”

24-hour junk food retailers like McDonalds are strongly opposed to any tax, releasing a statement saying ‘if the government wants to pretend it’s fighting the unwinnable war against fat people then we’re more than happy to play along – but if they start taxing our most valued late-night customers – stoned teenagers – then we’ll do everything we can to stop them.’