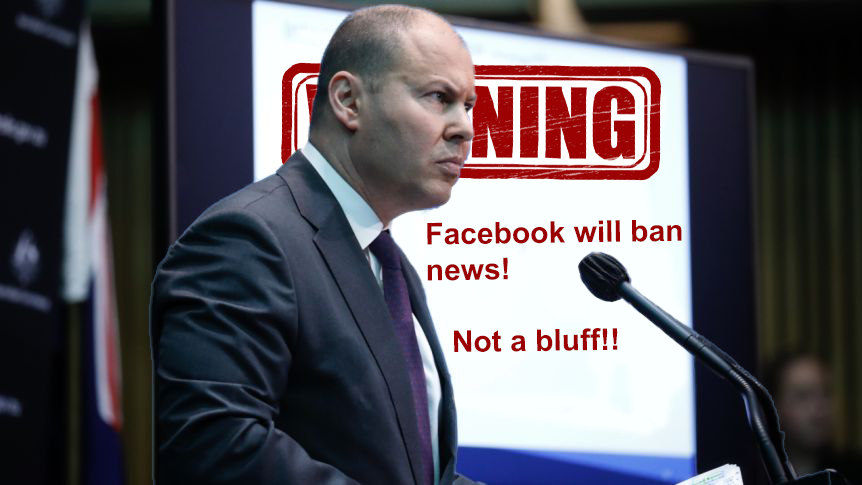 The Australian Government has once again proven how good it is at its job by expressing their shock that Facebook wiped news off its platform in Australia, something the company has repeatedly said publicly that it would do for months. Treasurer who previously claimed the warnings were a bluff, Josh Frydenberg, spoke to the media today about his anger that ‘no warnings were ever given’.

“Facebook gave no indication that this outcome was a possibility,” claimed Treasurer Frydenberg despite Facebook having the stance they would do this ever since the drafting process of the bill last April. “It comes as a complete shock to us all. To do such a thing without warning or negotiation with us is heavy handed. I know how much Facebook has negotiated, because I have been the one in charge of telling them the bill will pass exactly how Rupert wanted it.”

“Facebook is a tax dodging American company who needs to pay its fair share, unlike poor long suffering News Corp who we all know always pays its tax. And we’re not going to waver on this. American companies do not dictate how Australia makes its laws that News Corp helped draft.”

“The thing is Facebook didn’t just take down news websites, they took down essential Facebook pages in their irresponsible tantrum. Just because the definition in the bill says they news sources, that doesn’t mean that Facebook had to consider them a ‘news source’. How were we supposed to know that they would react to the bill as written.”

“People claim we knew this would happen. But as a politician, in my line of work when people say they will take a stance that means only until the media stops talking about it. You don’t actually do it! I should have known something was up when they didn’t invite Guy Sebastian to their press conference.”