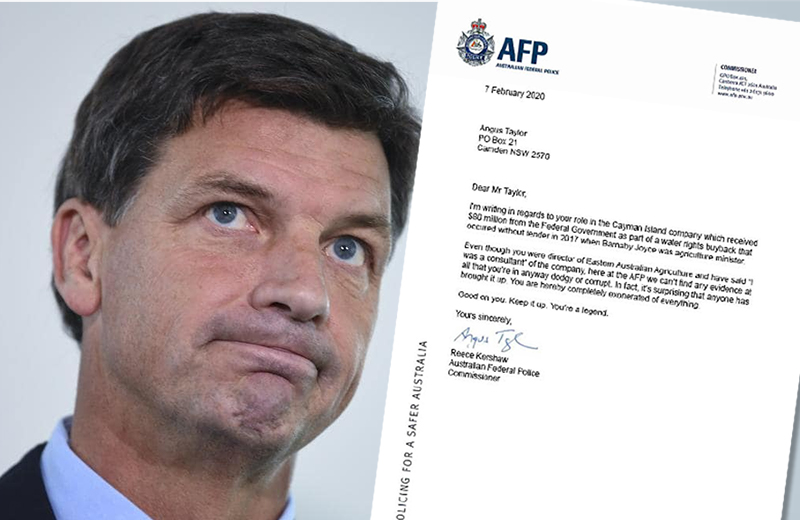 Angus Taylor has released a new bombshell document in which the the Australian Federal Police Commission tells the Energy Minister he’s “a legend”, and exonerates him of “everything”.

The letter clears Mr Taylor of any corruption over a Cayman Islands company that received $80 million in taxpayer money from then Water Minister Barnaby Joyce. “Here at the AFP we can’t find any evidence at all that you’re in anyway dodgy or corrupt,” the letter said. “Good on you. Keep it up. You’re a legend.”

Mr Taylor’s office release the letter just hours after the AFP cleared him of forging a document that made it look like his political enemy Sydney Lord Mayor Clover Moore had spent tens of thousands of dollars on travel, when in fact, she hadn’t.

Although the latest letter is purportedly from the AFP Commissioner Reece Kershaw, commentators have pointed out that the signature on the letter looks very similar to Angus Taylor’s own signature.

Mr Taylor’s office also released a letter from the Pope declaring him to be “pretty much as good as Jesus”, and a letter from the Queen declaring Mr Taylor “the bravest and most handsome man in the Commonwealth.” His office shared with the press documents which show that Mr Taylor came first in the men’s 100m sprint finals at the 1996 Olympics in Atlanta.

Meanwhile, Labor leader Anthony Albanese has said he is awaiting polling from Central Queensland before he works out whether he’s for or against the forging of official documents.