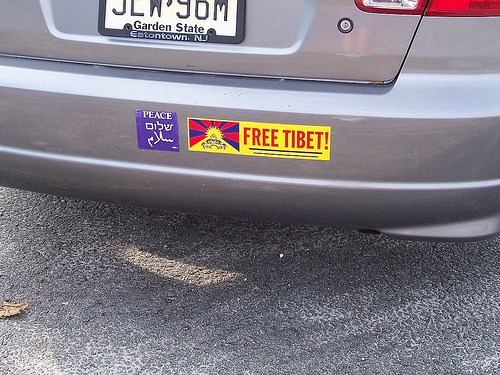 In a sombre address to the UN yesterday, the Dalai Lama called on the international community to recognise that bumper sticker-based diplomacy had failed his country.

While praising the efforts of Kombi drivers and cyclists for their dedicated support, the spiritual leader’s central message was one of disappointment. Despite claims, bumper stickers had neither “raised awareness” nor caused people to “get involved”.

“We must face the painful fact that this automotive campaign, while enlightening and colourful, has not mitigated the suffering of the Tibetan people,” he said. “These messages may have reached the hearts and minds of thousands of passing motorists, but apparently our Chinese oppressors were not among them.”

His Holiness is confident that even if the bumper stickers should fail, the Tibetan Freedom Concert will succeed

When asked about the Dalai Llama’s speech, Chinese government sources said that they were unaware of any sticker campaign, and denied persecuting Tibetans, unless they were members of Falun Gung.

Analysts say Tibet is only the latest in a long line of issues failed by bumper stickers. The concerted “NO HOWARD” drive, for example, failed in both of its stated objectives.

But not everyone is ready to abandon this avenue of negotiation. “The problem here is not that stickers don’t work,” says Jane Francetti of the Free Tibet Coalition. “It’s that too few stickers in a limited palette of colours don’t work. Perhaps if the message were more prominently displayed, say on a diamond-shaped piece of yellow plastic dangling inside the rear windscreen, it would exert more diplomatic pressure.”

Tibetan nationalist groups, however, are unconvinced, and say that the program’s failure will force them to turn to more militant forms of resistance. Pocket groups of celebrity fundraiser organisers are ready to be deployed, and there are claims that Martin Scorsese has already commenced work on a sequel to his 1997 flop Kundun. Some extremists have warned of possible attacks of Richard Gere’s incoherent moralising.

Former bumper sticker activists have agreed to support the new strategies, but have cautioned Tibetan groups that if their van’s a-rockin’, not to come a knockin’.