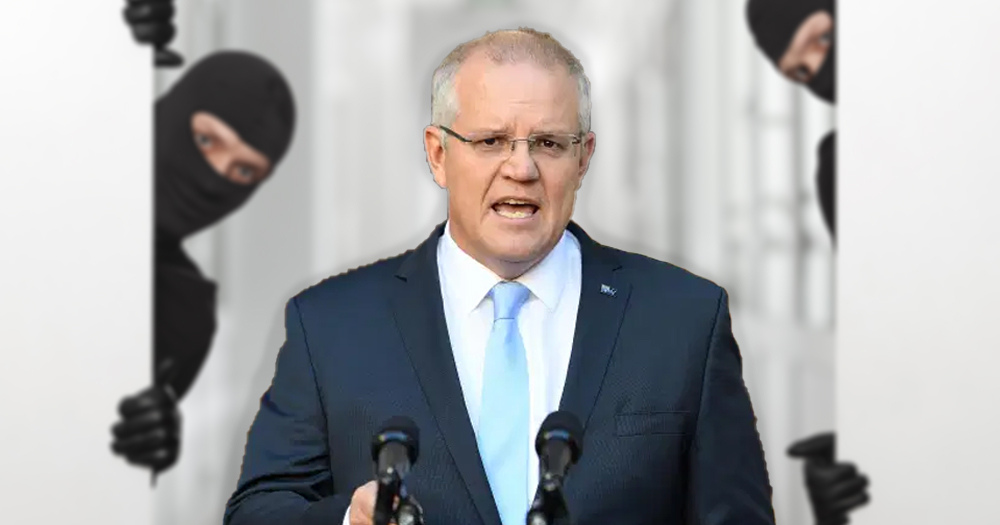 Scott Morrison has unexpectedly announced a widening of his JobKeeper payment, announcing a new stimulus for burglars unable to work from other’s homes. The move comes as more and more people are working from their own homes, preventing burglars from thieving.

“I want to provide aid to all Australian burglars because they’ll currently be feeling the pinch as more and more people are working from home,” Mr Morrison proudly announced to the exasperation of home owners and renters.

The Prime Minister went further, asking all Australians to fullfil their civic duty by publicly, and in advance, announcing on social media when they will be leaving their houses and for how long. This would give burglars time to plan and prepare their thefts.

The move has been widely praised by robbers and the Australian Burglars Union.

“What people dont realise is that whenever a burglar robs a house, it keeps others in essential jobs: police, insurance agents, glass repairers, locksmiths, cleaners – all of these essential jobs will have to make cuts if burglars are unable to do their jobs,” the Leader for the Australian Burglars Union, Rob Burr, announced on Twitter following the Prime Minister’s press conference.

A proud Melbourne burglar, who wished to remain anonymous, announced, “I tried doing what Scomo said and work from home, but I ended up stealing my own things and selling them to Cash Converters for far less than what I paid for them. This new aid package and guidelines by Scomo will help me rob from the rich and sell to the poor.”

Mr Morrison proudly unveiled the new package while taking a dig at Labor’s infamous 2008 stimulus package stating, “Kevin Rudd, with Labor, never thought to give aid to burglars during the GFC, that’s why the Liberals stimulus package is better.”