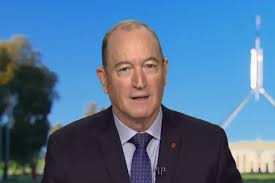 Bob Katter’s Australia Senator Fraser Anning says he has never heard of the Nazi Party, despite claims he was seen goose stepping down the street in a full SS uniform yesterday.

The Senator claimed that he was simply stretching his legs. “Um, exercise. I love the outdoors you see, lots of Lebensraum.”

The claims come after he talked about banning Muslims using the phrase “Final Solution.”

But Anning dismissed criticisms he was aping Nazi sentiment. “No, it’s leftist nonsense, mostly from the Labor camp. And if you disagree, I will send you TO a labor camp!”

Despite calls for Anning to resign, Anning says he’s not going anywhere “I retain the full support of all 19 people who voted for me in the Federal Election.”

“Besides,” he said, “I’ve just been offered a regular job on Sky News.”