General News
Bill Shorten steps to Scomo by shitting himself at Newtown Oporto
May 4, 2019 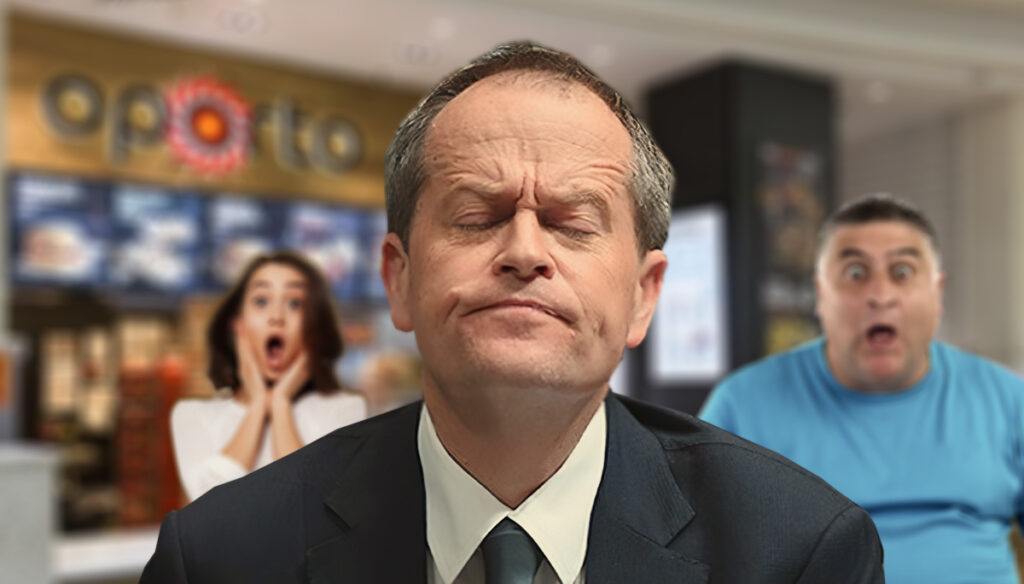 Labor have found themselves once again in damage control this week, with the election just two weeks away and only 1% of Australians able to remember the name of their leader. In a desperate move to finally make a splash with voters, opposition leader Bill Shorten shocked onlookers last as he took a page out of Scott Morrison’s playbook, by entering a fast food chain in Newtown and soiling himself in order to get voters attention.

“Look it worked for Morrison,” explained an onlooking media advisor, “The Liberals got a good two weeks of nonstop meme action out of the Engadine Maccas fiasco, and we’d really love to get in touch with our youth base like that too. Sure some people might say that this is undignified and lowers the bar for politics, but to them I say, have you fucking looked at politics around the world in the last three years!? If anything this is raising the tone considerably.”

Making his way to the centre of the Oporto, Mr Shorten called for a bit of hush, before launching on a speech about his policies. “I uh, hnnng, just want to say that the franking HUGEREGH, uh, franking credits are disproportionately benefiting the rich,” said Shorten to a confused but undeniably captive audience. “But more importantly I will make it a top priority to ban any fast food restaurant that requires you to make a purchase before using the bathroom.”

However, News Corporation have instantly hit out at Shorten, calling his choice of eateries in which to soil himself ‘elitist’ and ‘out of touch’. “Of course Mr Shorten would choose some inner-city stronghold like Newtown in which to defile himself,” blasted Peter Credlin on Sky News today, “typical latte-leftie. If he was really in touch with the common everyday working families of this nation he’d shit himself in the Rooty Hill Maccas or KFC in Blacktown like a real true blue Aussie, and then he’d give a tax cut to some billionaires just to show how in touch with the working man he is. That’s why we need Abbott, I mean sorry, wrong card, that’s why we need Scomo.”

“Up next we’ll be debating why Shorten did so terribly in last nights debate that he only won over 53% of the audience poll. But first a word from our last remaining sponsor.”