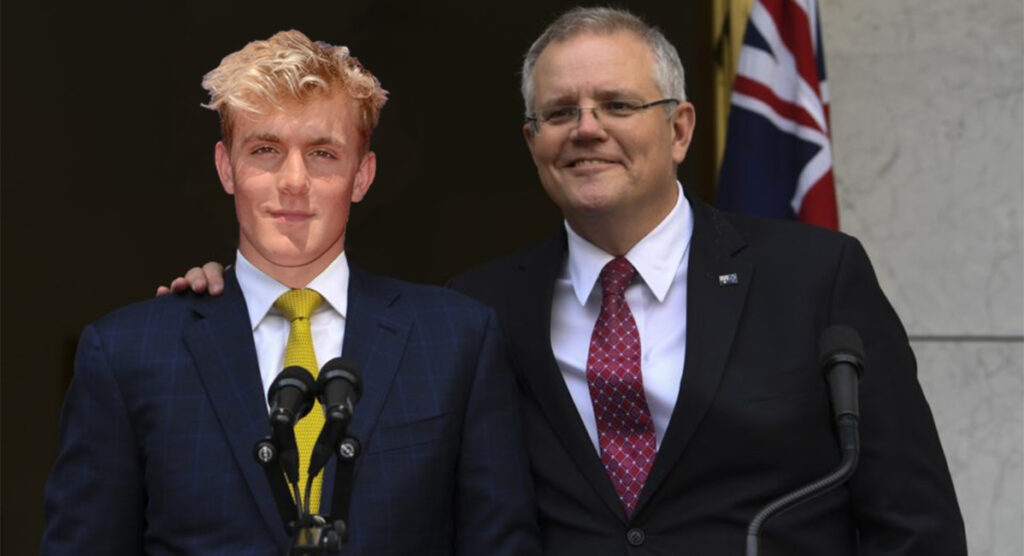 Professional children scammer and vlogger who somehow makes the ‘suicide-forest vlogger’ look like the nicer brother, Jake Paul has announced that he will be shifting career and joining the Australian Liberal Party front bench. This announcement comes in the midst of sexual assault allegations emerging against the vlogger, which according to sources effected the negotiations as it increased the LNP’s desire to hire him.

The disgraced former Disney actor announced he will be stepping away from his work testing the meaning behind what it is to be a ‘professional boxer/rapper’ in a video during the small parts of his videos that aren’t advertisements targeting the insecurities of kids.

“Yo, so I got a crazy announcement for you guys,” said the unofficial mascot for ‘Young Libs’ groups around the country, “so I am joining politics. I am going to be taking a break for all this craziness, and am going to be bringing my savageness to Australian politics. That’s right I am going down under y’all! They said I ‘am a perfect fit for our culture’.  Well I mean everyone keeps leaving my company for some reason so why not? I hear these guys know how to party, I wonder if they will let me invite Chris Brown?”

A representative for the Liberal Party told us that, “We have been eying him off for a while. A young person with a big young audience with a history of racism, sexism, scamming parents, downplaying covid, never accepting the blame for anything, being a compulsive liar and having no morals when money is involved; we thought damn he is perfect for us. Now that these allegations came out it does make it tricky, it’s going to be hard to control our excitement.”

“He has a lot he could bring to our party, like when we saw the video he did where he pressured a women into judging a kissing contest blindfolded and didn’t tell her his dad was in the competition too, we thought ‘that’s something we should try’. I mean literally stealing candy from babies, imagine what he could do with policy?”

Jake Paul may not be the only influencer joining the LNP, with insiders telling us the team is also in talks with other youtubers with young fan bases including: professional enabler who realised directly profiting off rape is ‘wrong’ after having a chat with his former advertisers David Dobrik and beauty guru who has the world record holder for ‘Most “Accidentally” Groomed Minors’ James Charles.