World
Trump imitates Turnbull in return by ripping out his own spine, backflipping across the room
June 21, 2017 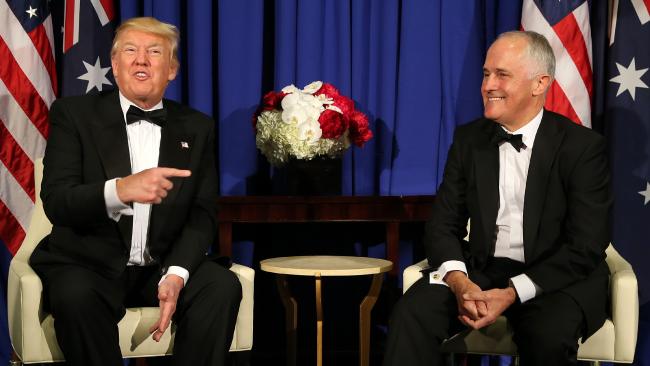 US President Donald Trump has today hit back at Malcolm Turnbull’s recent imitation of him by tearing out his own spine and crawling on the party room floor.

In a series of tweets this morning, Trump posted photos and video of the imitation of the Australian Prime Minister, in which he appears to be nothing more than a pile of flesh draped in an Armani suit.

“There are a range of views around Australia that we all need to hear!” Trump is heard saying in a faux posh Eastern Sydney accent. “Let’s have a plebiscite!”

His disembodied backbone can be seen swung like a bullwhip in the background by White House advisor Steve Bannon who is dressed as North Queensland MP George Christensen.

The Trump Turnbull lookalike then is seen backflipping across the room away from a renewable energy target.

This is after a video surfaced of Turnbull’s speech at the midwinter ball in Parliament House where he clearly imitates Trump’s voice, gestures and popularity.

Nine News political reporter and Heritage Listed Australian national treasure Laurie Oakes leaked the video as a clear slight against all who were at the event:

“@MalcolmTurnbull I didn’t want to be invited to your lame midwinter ball anyway but maybe this will make you think twice next year. #justsaying” his tweet leaking the video read.