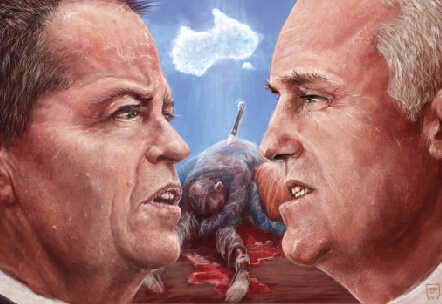 Malcolm Turnbull has refused to name the specific number of the day in July that the election will be held, despite being pressed by journalists.

His refusal comes just days after Mr Turnbull refused to reveal the cost of his corporate tax cut.

“It’s a date in July, but I’m not going to get into the argument about exactly which date it is. It’s not something that we’d put a number on, generally.”

It was later revealed that the date has already been calculated by the Government, and that it will be held on the 2nd of July.

Malcolm Turnbull visited the Governor-General Peter Cosgrove earlier today and asked him to dissolve both Houses of Parliament, to which Cosgrove responded, “Are you sure? Are you absolutely sure?”

Mr Turnbull told Mr Cosgrove he was pretty definitely sure. “Like, I’m pretty sure. 98% sure.”

Mr Cosgrove then gave Mr Turnbull five minutes to think about, and asked him to examine his polling data one more time before coming to a final decision. But Mr Turnbull was adamant, and demanded Mr Cosgrove parliament immediately.

Mr Cosgrove told Mr Turnbull that he would be waiting until Monday to formally dissolve parliament, because it was the weekend, and he didn’t want the government to have to incur the extra penalty rates for him working on a Sunday.