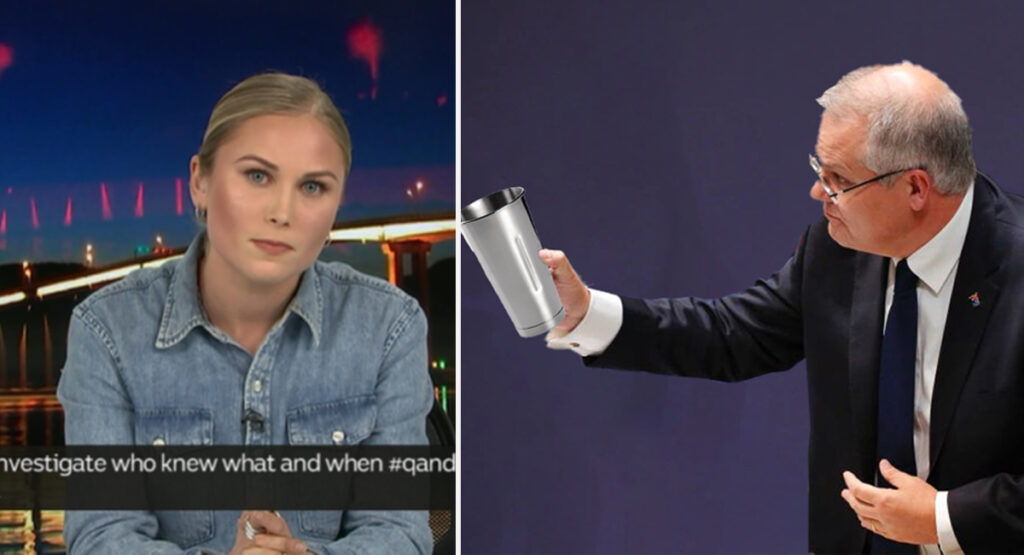 Scott Morrison, has responded to last night’s episode of Q&A by offering Grace Tame a milkshake.

This comes after the Australian of the Year demanded immediate action by the Prime Minister, after his government covered up an alleged rape in Parliament House and then spent six months doing PR instead of helping the alleged victim.

“Look, plain and simply, if a milkshake can’t solve the issue of systemic sexual abuse then nothing can,” said the PM speaking over a female colleague earlier today. “Grace Tame said what she said and I bet she felt good or whatever, but this government has always shown commitment to helping the real victims – people whose careers may be threatened by these allegations.”

“While I didn’t personally watch Q&A last night, Jenny tells me it was interesting,” continued the Prime Minister. “I have been told there needs to be more people with ‘lived experience’ in the conversation about sexual assault, and I agree. As long as it doesn’t come at the expense of the amount of men who aren’t experts weighing in and leading these discussions.”

The Prime Minister who gave the ‘Prime Minister for Women’ job to someone else, said it was important to understand these issues through the perspective of being a father of a woman. “My daughters love milkshakes, who doesn’t want a milkshake? Also when you’re drinking it remember it would be rude to talk about things while drinking a milkshake so no more discussion on this please.”

The Prime Minister also declined to comment on Tame’s suggestion that a lie detector be used to find out who knew about the alleged rape of Brittany Higgins. In unrelated news, Google searches in the Canberra area for ‘how to beat a lie detector test’ have soared.