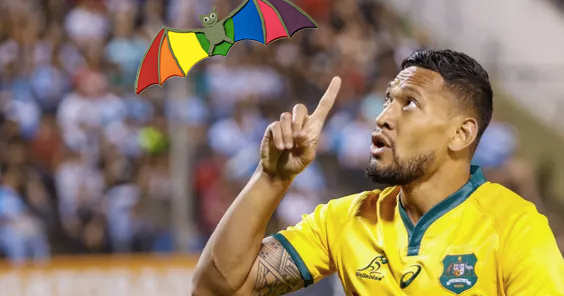 Former Australian Rugby Union star and current Catalan Dragon Israel Folau has claimed that the bat that started coronavirus was gay. Speaking to an audience of up to two French bystanders, Folau took to an upturned bucket to give his oratory.

Gesturing firmly and shouting more than strictly necessary, Folau said “There is a lot that science can’t tell us about coronavirus. But I can tell you that if it was spread by a bat, then that bat was gay. There is no other explanation that makes sense in the context of my very specific worldview. The virus is punishment for our Babylonian tolerance of the sin and decadence in our communities – and between our brothers and sisters, the animals.”

“The animal responsible must have led a sinful existence, and that means it was definitely gay. Coronavirus was started by a gay bat.”

The existence of homosexuality in the animal kingdom has long been debated. The responsibility of gay animals for causing pandemics, however, has not.

Folau would not confirm if it would be better or worse if the bat was married.