General News
‘I don’t have an issue with how I treat women’ claims PM who hurt an old lady during photo op
February 21, 2021 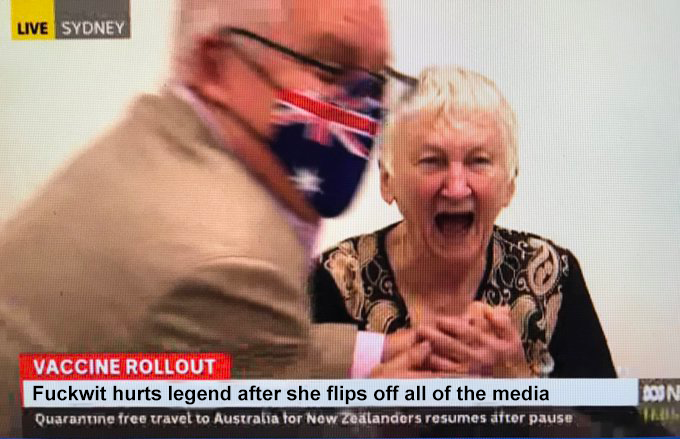 Part-time Prime Minister and full-time photo shoot model, Scott Morrison has today reaffirmed his claim that he nor his party have an issue with how they treat woman. Mr Morrison decided to prove that by sitting next to elderly legend Jane Malysiak for a photo-op while she was the first to receive the covid vaccine, things quickly ‘went wrong’ when the PM told her to put her fingers up in a ‘V’ shape like a loser, which she did before turning it around like a champion telling the nations media to shove it. In order to look good in front of the nation’s media, Mr Morrison decided the best course of action would be to silence and physically hurt the lady, out of fear that the optics might look bad.

We spoke to the dickhead after the incident to hear what he had to say.

“I will make this crystal clear so that the ladies can understand,” said the guy who looks like he says ‘boys will be boys’ every night before bed, “I don’t have an issue with how I treat women. The ladies that think I do are just getting confused because it can be a bit much for them. What I have a problem with is bad PR, and for some reason whenever I deal with the lesser gender, I apparently end up looking bad somehow.”

“You see, I have no issue with woman who do what they are told. What happened with Jane was that she was told what to do by the nearest man, which to her credit she did do. But then she thought it would be ok to do something without asking a male’s permission and that can be very dangerous for a woman. Do I regret hurting her? Sure why not. But I think we can all agree it was wrong of to try and banter and be funny while she is a woman with men around.”

“The women in this country need to understand is that they have gotten a bit out of line ever since Tony left. They are getting a bit to talkative if you ask me. Clearly they need a proper leader who understands the world. Like did you see Ardern refused to take the vaccine until all the at risk people in New Zealand get one first, typical. She doesn’t even know what’s best for her as a leader.”