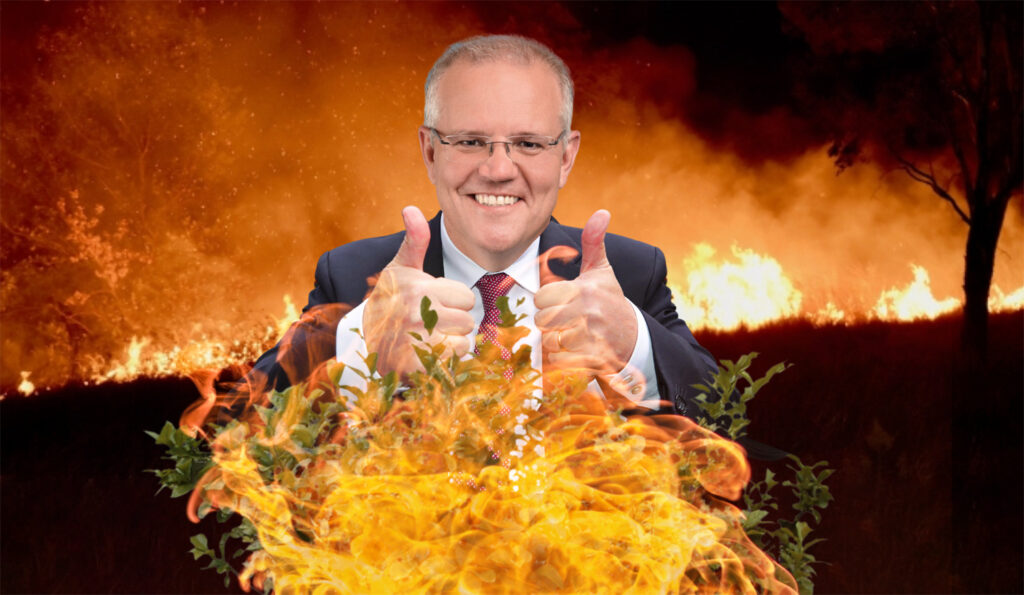 Prime Minister Scott Morrison has today called off all firefighting efforts after having a divine revelation that burning bushes distributing life advice are a core part of the bible, and therefore are protected under the religious discrimination bill. “Stop! Stop!” Morrison could be frantically heard shouting at firefighters as he tried to drag them away from the front lines, “Any one of these burning bushes could be God trying to Skype me!”

“At first I thought god might not have been answering my thoughts and prayers, which was deeply concerning given it is our main defence against bushfires,” explained Morrison later at a press conference. “But then I turned to my bible for guidance and I realised, that much like the parable of Moses and the burning bush, these fires are gods way of speaking to me, the leader of the people, to tell me to lead the country into a dry, barren desert over the next fourty years, just as Moses did. So from here on we’re going to do our best to speed up climate change, which frankly is a challenge given we’ve already set the bar pretty damn high.”

However, when asked if the fires were his doing, creator of the universe God said that such ideas were ludicrous. “Hell no! I mean, heck no! Sorry, pardon the language. No, I haven’t done the burning bush material since my Old Testament days. I was a very angry and violent deity back then, I’m not afraid to admit that, the holy spirit put me on to zen meditation and I’m happy to say I turned over a new leaf, and a new testament for that matter. No, these days I’m more a love and peace kind of God, fire and brimstone would be very off brand for me. If anything those bushfires are probably Lucifer’s work. That guy is a real dick, you know just the other day he was telling me he doesn’t support gay marriage? I mean, can you imagine? What kind of a monster would be against something like that.”