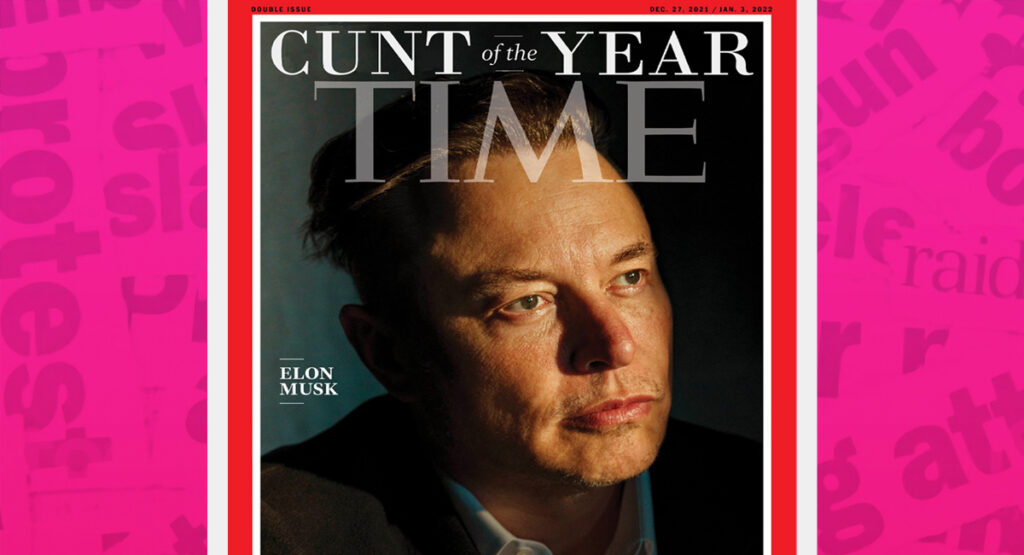 A rich cunt has been named cunt of the year by Time magazine.

The man, who has spent much of the pandemic lobbying against Covid-safe policies that would keep his workers safe, was hailed by Time’s editors as one of the biggest cunts they’d ever encountered.

Elon Musk has spent much of the pandemic selling off his fortune in case tax laws in America change so that off-shore banking, stock-based wages and crypto money laundering won’t allow billionaires to avoid tax anymore.

He dreams of living on Mars in the hope of avoiding international law, even though international laws mainly just protect basic human rights and human dignity. Lately Musk even likes to live-tweet his union busting.

“Just dropping off threats to any workers who want to be treated as humans,” the 50-year old cunt informed his 66 million followers on Twitter where he says half of his tweets are made while sat on his apartheid emerald throne. “This union is going to blow up like it’s a battery in a Tesla.”

Musk has spent a lifetime defying haters and doing it all on his own, overcoming a brutal upbringing of growing up rich and white in South Africa.

As always says he ‘did not go to Harvard, but now he employs people who did’ as he was forced to slum it out in a run-down tiny university called ‘Stanford’. Finally from those humble beginnings the man can finally put the haters in their place producing everything from self-driving cars that run people over and rockets for use by the US military.

While he has faced criticism for some of his actions, Musk has made it clear that anything he does wrong is due to his Autism Spectral Disorder. While experts claim that things like hanging out with Epstein, scamming the public, lying about future projects, downplaying a plague and every other cunty thing he has done are not actual traits of ASD, Musk swears that it is and that you should let that affect how you see people with autism.

His wealth is a mere side-effect of what his brain produces, which is just shit memes. But his ability to take credit for other engineers’ work is truly unmatched. But with ambitions like his there is bound to be consequences, like when he lobbied against Covid-safe guidelines for factory workers, illegally kept factories running through covid, and many sexual harassment cover-ups, the man has faced serious consequences like being told he isn’t allowed to pump and dump on the stock market anymore.

After everything Musk has ever said and done, the man deserves to be remembered alongside other winners like Jeff Bezos, Mark Zuckerberg, Rudy Giuliani and Adolf Hitler.