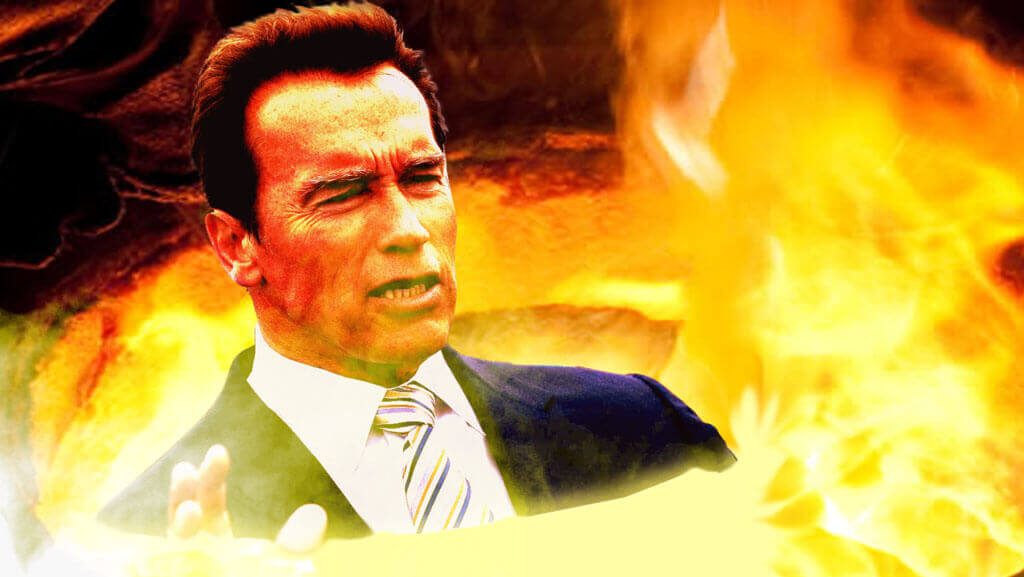 Arnold Schwarzenegger has ended his tenure as California Governor in controversial fashion, offering a frank apology for his shortcomings before slowly lowering himself into an industrial vat of molten metal.

Battered by years of criticism and accusations of faltering economic management, Schwarzenegger could only muster a plaintive “thumbs up” sign before turning away from reporters and activating a mechanical hoist to take him to a certain fiery demise.

California Democrats say it’s the one significant accomplishment of Schwarzenegger’s years as Governor. “Arnold always liked to say ‘I’ll be back’,” one critic said. “Thank God for term limits.”

A source close to Schwarzenegger claims that before his demise, the Governor cut a deal with a prototype computer network known as Skynet to send himself back in time, so he could convince his past self not to run for Governor.

His former press secretary says that the actor’s self-sacrifice was a noble gesture designed to prevent a nightmarish future where California is ruled by an even more mediocre series of actors-turned-politicians. “Arnold felt that destroying himself was the only way to protect future generations,” his longtime secretary said. “From Governor Rob Schneider.”

“Why couldn’t he be content just to be the world’s greatest action star and leave politics alone?” asked his widow, First Lady Maria Shriver. “Still, at least it wasn’t as big a failure as his foray into comedy.”

Having been burnt by the failure of the celebrity ‘Governator’, California voters have vowed to choose a more qualified replacement who could balance the ailing state’s vast budget. The current favorite to replace him is Matt Damon, who played a maths genius in Good Will Hunting.

Schwarzenegger is survived by Shriver and several children, one of whom he gave birth to in the film Junior.