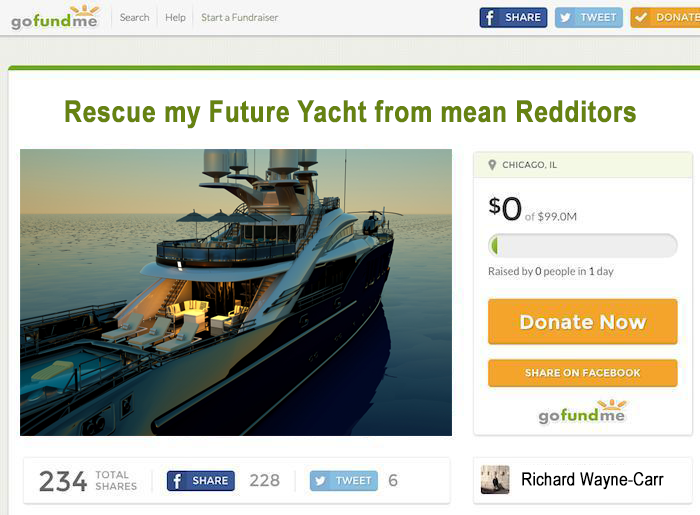 Horrific news today stemming from the tragic ongoing saga of people who aren’t millionaires making millions of dollars by investing their hard earned money into companies so that billionaires can’t artificially crash the stock causing the company to go bankrupt, putting tens of thousands of people out of the job and destabilizing the market for a quick buck. The victims of this heinous act, the billionaires, have become so desperate that they have had to turn GoFundMe to help them raise money for a third yacht, instead of their normal methods to get money from the public like the stock market and lobbying.

“Please help me, my life has been ruined by immoral douchebags trying to game the system,” wrote the immoral douchebag who constantly brags to potential clients about their skills at gaming the system. “I have fallen victim to an unavoidable and needlessly brutal attack on the little guy and I desperately need your help to stop it. ”

“You see I was making an honest day’s living just trying to short selling stock, which is where you deceive people into buying stock but selling enough of it that the stock price would plummet meaning I can profit on the difference. Now these mean bullies online wouldn’t let me because  ‘the company could risk bankruptcy which could hurt lots of people’, but now my poor hedge fund is the one that has been hurt as it owes tens of billions of dollars. I know the greed of some people right.”

“How am I supposed to do business now? The whole point of the stock market is to trick peasants into thinking they can become rich while we trick them into giving us their money, they weren’t actually meant to become rich! See it is meant to be a high risk high reward game we play, not some sort of game were enough gamers come together as a meme to make a point. These online trolls are hurting hard working honest businesses and making millions from it, that they don’t even want to use! They are unfairly manipulating the market by stopping me from manipulating the market. What absolute scum!”

“This may be confronting for some of you to hear, but because of this whole painful ordeal, I might have to cancel the purchase of my much needed 3rd yacht. You see I am planning to buy three identical yachts and have my children Charles, Me Jnr and the other one race the boats around the world to see which one wins the largest proportion of my estate in the will. Of course they wouldn’t be alone, we would have to hire lesser people to drive the boat, make the food, chart the course, serve the alcohol and provide entertainment for my hardworking children.”

“But now I cannot afford it until at least next tax season when I get given the money you lot pay in taxes anyway, and since you are all nice enough to actually pay your taxes I thought I would ask you to help a poor rich man in his time of crisis. I mean is the worst crisis since the one hedge funds started in 2007, please help me.”