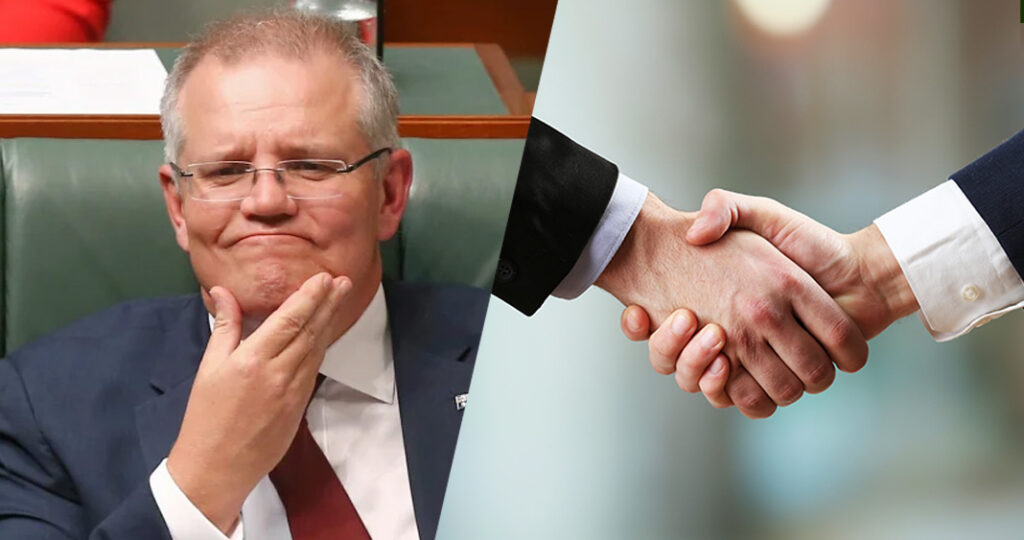 After already splashing out $190,000 on an ‘Empathy Consultant’ that resulted in a Hawaiian holiday while the nation burned, Australian PM Scott Morrison has today added another consultant to his roster in an attempt to cope with the difficulties of interacting with real Australian human beings. This time, it’s a ‘Handshake Consultant’.

The move comes in the wake of Morrison’s trip to the fire-stricken town of Cobargo where his attempt to use the mourning locals as public relations props didn’t exactly go to plan. We spoke to Morrison’s new consultant to get the run down on his performance.

“Well, look, there’s a few things to work on. Ideally, in this situation, the locals just play nice and smile for the cameras,” explained the consultant. “But sometimes you need a Plan B. When it comes to touching other people, consent is important. So, for example, and this is purely a hypothetical, if there’s a grieving woman standing there saying ‘I’m only shaking your hand if you promise to give more funding to RFS’ what I wouldn’t do is aggressively reach down and grab her hand, forcing her to shake it against her will, while I smugly smile for a photo op before my handler walks over and pushes her away as I’m turning my back and walking off while she continues pleading for help. That would be absolutely inhumane. But that’s a random example and it’s just my opinion.”

He went on to say that ‘what the aim is here is to at least give the impression that Scott is a human being that can relate to other human beings and that’s not always easy.’

“Another example might be something like this. If I’m approaching an exhausted and demoralised firefighter who’s just lost his home, here’s what I wouldn’t do. If, by chance, this firefighter was to say ‘I don’t really want you to shake my hand’, there’s no real grey area there, is there? Again, it’s the whole ‘consent-y’ thing isn’t it? Sometimes you have to be able to empathise with other people’s situation. ‘Read the room’ if you will. Especially if there is no room anymore because it just burnt down in a raging inferno. The last thing I’d do is angrily grab the guys hand, wiggle it around a bit, and then sulk off. That’s a worse case scenario response, of course.”

It’s believed that initially Morrison had asked if ‘Jenny could just do this stuff’ from now on, but his advisers recommended at least trying the ‘Handshake Consultant’ first. From tomorrow morning, Morrison will start each day by running what is called ‘The Gauntlet’. It’s similar to a US Police Shooting Range, but instead of people of colour popping up, it’s various citizens that Morrison must respond to with the appropriate handshake. It’s believed he failed the first drill after telling a grieving cardboard cut out family that ‘at least the cricket is on this arvo’.

Despite Morrison’s actions being called ‘absolutely unconscionable’ by Piers Morgan, a guy who hacked dead people’s phones, hopes are high in Canberra. It’s believed that the talented shaker worked on Lebron James’ pre-game handshakes during the Cavaliers 2016 NBA Finals, causing the Warriors to blow a 3-1 lead, so it’ll be interesting to see what he does with an empty shell of a man void of all human emotion.