General News
Journalist does finishing touches to a Christian Porter story they prepared last night for no reason…
March 3, 2021 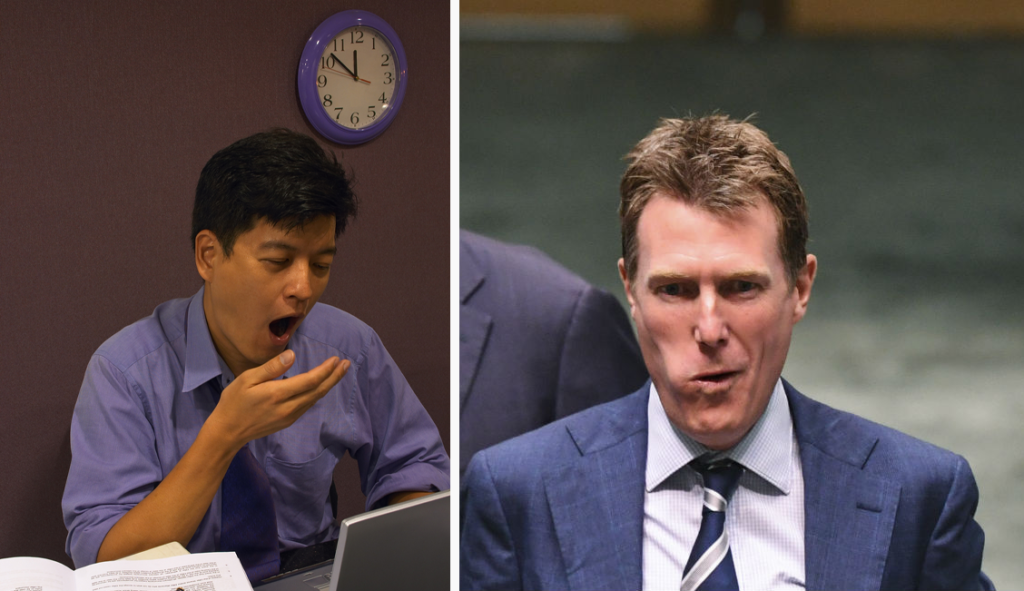 Local journalists have allegedly woken up this morning to do some finishing touches to a story that they wrote about Attorney-General and *Redacted* Christian Porter last night that will allegedly be released some time today, for ‘no particular reason’. None whatsoever.

“You always want to be prepared with a story like this,” said the journalist who definitely wants to stay anonymous after getting off their phone with their lawyer, “a story that is about nothing. I don’t know what you’re talking about. Just a normal story about a boring mundane announcement that I am not waiting for him to make today. Can a journalist not just write a casual story about the Cabinet Minister with a history of sexual harassment claims whose Wikipedia was edited to have information putting him in Sydney in 1988 a couple days ago? Allegedly.”

“See my lawyers reminded me that there is… umm… no reason for me to have stayed up last night writing a story that I am now doing the finishing touches on. See it is just a coincidence and any other legally sound excuse that I allegedly started writing the piece in question when it was told to the press that a certain alleged Cabinet Minister would be outing themselves today. See the fun thing with Australian defamation law is even if hypothetically one did write something that is completely true they can still lose the lawsuit if it hurts the feelings of the plaintiff enough. And that is fine because my story is about nothing and wouldn’t have any impact his reputation.”

“In fact there is a chance the nothing it is about is not even to do with him, and I will end up needing to scrap it. But I mean come on it is so him right? Like some people say it could be Angus Taylor but please we all know it’s him…. Who allegedly did nothing wrong? Nothing whatsoever… I should probably stop talking.”

Due to our history with defamation law, our lawyers have told us to make sure it is clear that we do not believe nor would ever imply that Christian Porter has ever had consensual sex with a adult canine. We do not think he would ever allegedly do something like that, more that he would allegedly do the opposite.