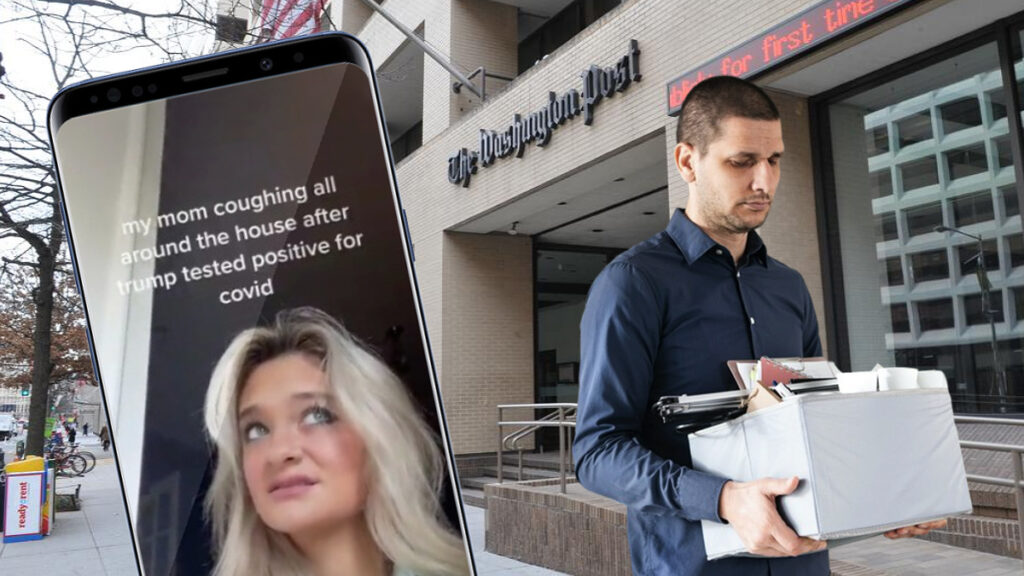 The world’s most famous investigative journal has today closed its doors, following a series of missteps in recent weeks that saw the newspaper accidentally lose vital scoops to teenagers on social media. The news comes in the wake of a string of revelations by the children of White House officials which undercut the administration’s official messaging – and unveiling a string of troubling covid infections as well as revealing the President’s dire health situation.

“Gosh darn it they did it again,” said one reporter seen throwing his hat on the floor and jumping on it repeatedly. “I’ve been working on that scoop for months! Does that dumbass Trump kid even know he just revealed the world’s largest case of political corruption, or is he just dumb enough to gloat about that stuff on social media and think he can get away with it?”

Other reporters have given up turning up to White House press conferences, choosing to instead spend their days refreshing the TikTok feed of Claudia Conway, and frantically writing down whatever she posts. “So far today we’ve established that Trump has a 50% chance of survival, Kellyanne Conway lied about her test results, and that Cindy has a crush on Jason which is totally controversial because he was dating her best friend Kayleigh last term which is like totes cray,” explained one grizzled Post reporter. “These revelation could spell the end of the current US administration if true, and is also terrible news for Corey who has secretly been crushing on Cindy for months.”

The paper, famed for its “Democracy dies in darkness” had recently also been forced to change its slogan to “democracy dies either way apparently” after the Trump administration’s open and unabashed corruption over four years led to no apparent consequences for Trump or his family. “They literally stole money from a children’s charity and they didn’t even get a slap on the wrist,” sighed one reporter. “I mean, what’s the point of even reporting on this stuff anymore if nobody’s even going to do anything about it. I might as well spend my time doing more productive things for society, like becoming a shelf-packer. Anyway, to answer your question the canned tomatoes are in aisle 5.”