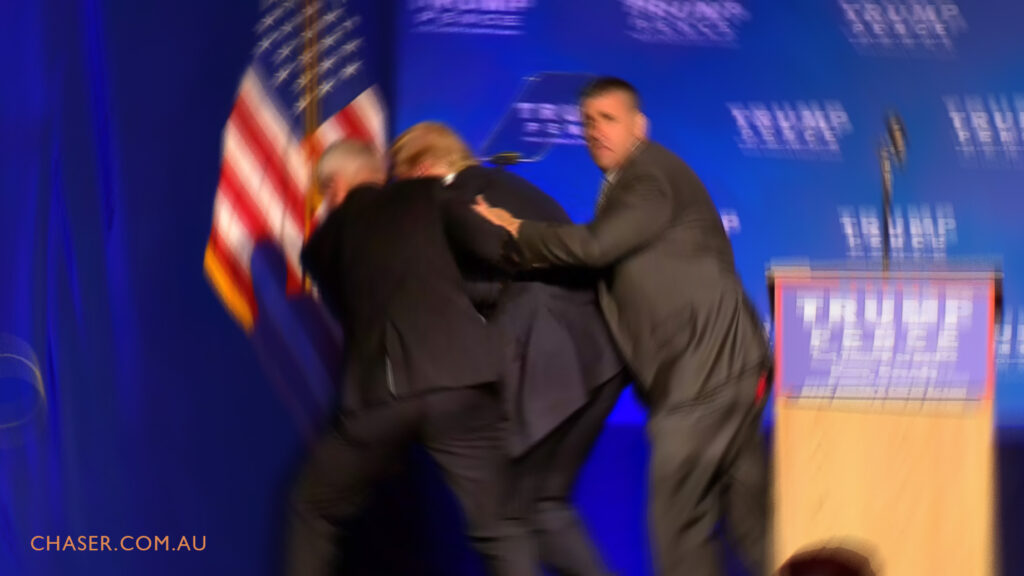 The President of the United states has been rushed to an emergency bunker on life support this morning, following a security incident at a rally that witnesses are describing as one of the most harrowing experiences of Trump’s presidency. Standing on stage addressing an auditorium this afternoon, Mr Trump was tackled off stage by secret service agents, after a “crazed” man was spotted walking through the crowd carrying a photograph of John McCain.

“God, imagine if he’d gotten just a few steps closer and had managed to get a clear eyeline to the President,” said one witness outside the auditorium. “I’m pretty sure Trump’s head would have exploded.”

The secret service report they have since apprehended the man, taking him down in a blaze of gunfire, though there are still unconfirmed reports there may have been a second photographer.

However, Trump has hit back at the claims in a televised phonecall to Fox and Friends, stating that the reports are false, and that he is ‘not scared of anyone, living or dead’. “I think you’ll find I’m pretty brave,” Trump explained somewhere in the 20 minute long uninterrupted monologue. “A lot of my friends they’re always saying to me ‘Donald you’re so brave, you’re the bravest person I know’ and you know I hate to gloat but I have to agree with them because you know I’m AAARGHGHHHHH. Oh, sorry I thought I just saw Robert Mueller, um… what were we talking about again?”

The threat to the President’s life is the second in as many weeks, with the White House reportedly having been forced to remove all computers from the premises last week after it was discovered that Wikipedia has been hosting photos and articles about McCain. Sanctions have since been deployed against the site, and it has been put on the list of known terrorist organisations.

Sources have since confirmed that Trump is now refusing to leave the bunker, after spotting a photo of John McCain in the hallway.