World
Mexico agrees to pay for wall
1st of your 1,000,000 free articles this month 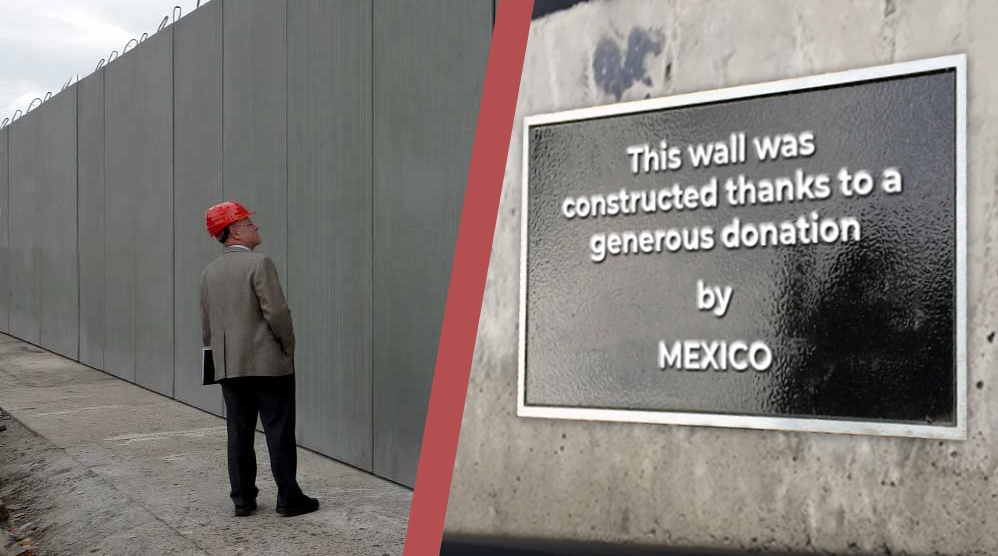 United States President Donald Trump has today convinced Mexico to build a wall on the United States border and to pay for it, after the entire nation devolved into civil unrest egged on by a twitter fight from the President.

“He did it, he really did make America Great again!” cheered Trump’s supporters as the country burned down around them. “Yes, sure there are now murder wasps, and the police are arresting journalists, and racism is worse than ever, and the hospitals are over-run, and 100,000 have died from a plague, and we’re in a cold war with China, and the economy has collapsed, and we’re keeping children in concentration camps, but on the up side nobody’s coming here from Mexico anymore so I think we can chalk that up to a win.”

Though the number of Americans crossing the border into their neighbouring country has been steadily on the rise since 2016, authorities are reporting that the problem has reached epidemic proportions recently, especially after the American President suggested people inject themselves with bleach.

“Really what we are seeing here is that people simply don’t want to live in a country with such visible corruption.” said one Mexican caseworker who has had to deal with the recent influx of refugees. “It also doesn’t help that the controlling regime is threatening military violence against its citizens. If this holds up much longer we might have to invade in order to force democracy on the country. We hear the current President seized power in a clearly rigged election where he won even though he got less votes than his democratic rival. What a sham.”

“There’s police corruption, innocent people are killed in gunfights daily, and a good percentage of the population are hooked on opiates produced by rich oligarchs who don’t face consequences because they donate so much money to the politicians. Hard to believe such a violent and corrupt country can exist right over the border from Mexico, you know?”