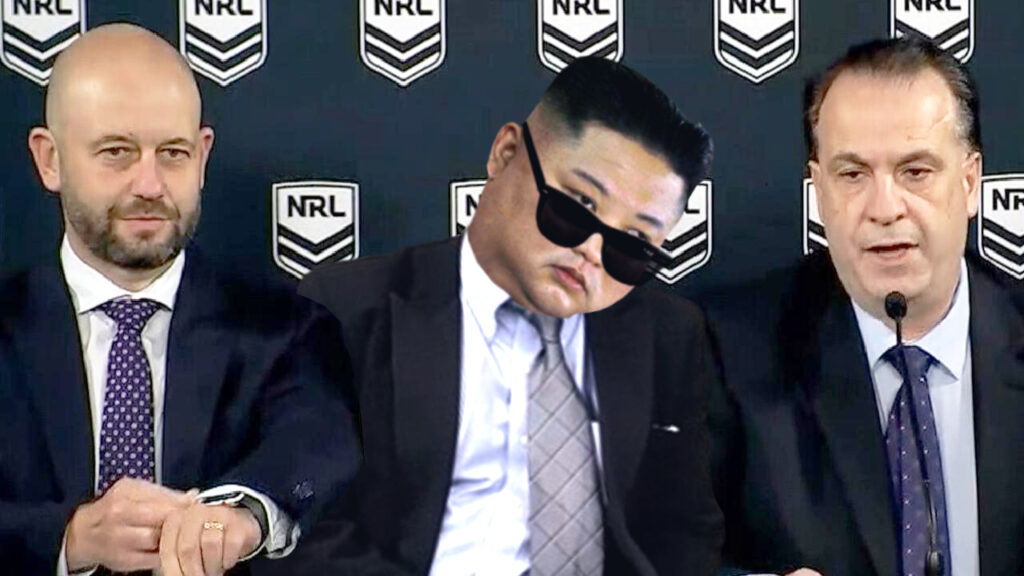 North Korean dictator and vegetable Kim Jong Un has today announced as the latest recruit drafted into the NRL after selectors heard that he has no detectable brain activity whatsoever, impressing selectors who said he is exactly what they’re looking for in a player.

“Have you recently uploaded any incriminating evidence to a popular social media platform, taken a photo of yourself draped with women at your house during a pandemic, leaked a sex tape, assaulted a partner, been arrested after assaulting a bouncer in Arizona, got busted for speeding while under the influence, taken drugs then tried to convince a team-mate to swap urine samples, taken detectable performance enhancing substances, bit a woman on the leg, stole someone’s watch, threatened to smash a referee on camera, overdosed on prescription drugs, broke into a New York apartment before being caught on camera punching a hole in the wall, simulated a sex act on a dog, mixed prescription drugs with energy drinks in an attempt to get high, posted pictures of yourself dining with a notorious bikie, tried to do drugs in a casino, poured a drink over your girlfriend in an argument, kept money from a charity auction, bet against your own team, had a salacious story leaked about you and your teammates after you refused to pay child support, accused your teammate of drugging their children without evidence, tried to escape police after being caught driving without a licence, got caught dancing naked in the street, or had a sex tape leak?” selectors asked the lifeless corpse. “I’ll just take that silence as a no. Welcome aboard!”

Informed that the North Korean dictator is literally braindead and not just an idiot who would snort coke in a TikTok video, recruiters said that’s even better. “God if he can’t move, speak, or lift his arms imagine all the headaches that will save us off the field,” explained one recruiter for the Roosters, “and to be honest it won’t make much of a difference to the quality of our chances of winning.”

Informed that Kim was actually a brutal monster responsible for the deaths of thousands, the NRL said they were deeply concerned by the news and would be issuing a $2000 fine as well as a good behaviour bond which will require Kim to attend two anger management sessions.