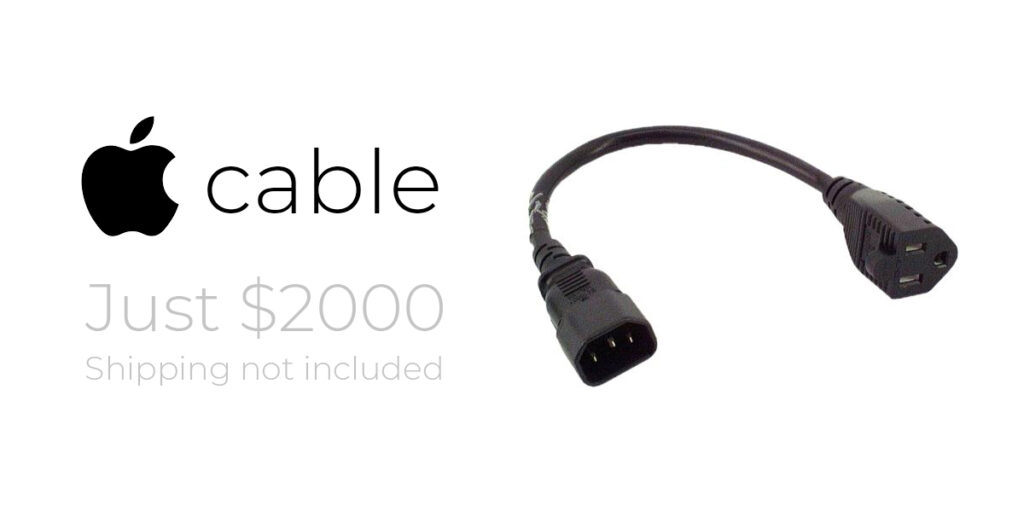 The Apple Corporation have today wowed critics and blown away fans, after unveiling their latest product release – a standard IEC-C13 monitor cable retailing for just $2000USD plus shipping.

“Now some of you may say, Tim that’s just a regular old monitor cable, you can get one of those at Radio Shack for $5” announced an excited Tim Cook this afternoon, “But you see there is one important difference here. If you look at the end of the cable we have our patented “Apple Logo” system painted on the end, which greatly increases our ability to charge for basic, everyday products.”

Though the product has not yet been released to the public, Apple has supplied a few demo items for reviewers to test, and so far results are positive. “I certainly cannot fault the cable in any way,” wrote one reviewer for Wired, “it certainly does not fail to deliver power from my wall to my monitor. While the price may be a bit steep, I think the elegance and sophistication involved with the way Apple bribed me to write this positive review is absolutely unparalleled.”

However, some critics have panned the release, claiming the $2000 price tag was unjustified given the cable is just a standard everyday black monitor cable. Apple has responded to these complaints, pointing out that customers can also buy a premium white power cable for just $500 more.