News
#eggteen No further nominations to be accepted for Australian of the Year 2020
March 16, 2019 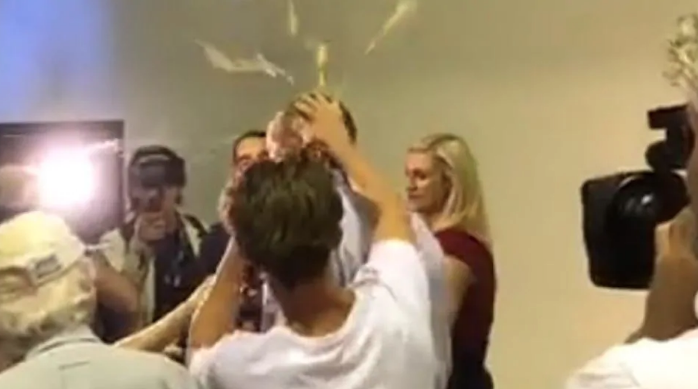 A simple act of irreverent political dissent has catapulted a 17 year old boy into the hearts of mainstream Australian and New Zealand, demonstrating that real human beings can prove a political point without resorting to the senseless murder of innocent people.

An as yet unidentified youth egged Queensland Senator and known fuckwit Fraser Anning today as the Senator held a press conference/exercise in cognitive dissonance regarding immigration and the tragic Christchurch mass shooting.

As a result, the youth has been unofficially titled the 2020 Australian of the Year by popular decree.

“And if he’s not Australian we can make him one,” said an onlooker at the scene of the egging in Melbourne.

“Egging racists is good form as it is, but to crack this pathetic fuck as he spouts his hateful and divisive cuntery, at a time when all of New Zealand and Australia try to come together as one in their grief… it couldn’t be better.”

“Unless Steve Irwin returns from the dead and solves climate change, the gong for Aussie of the year has to be his.”

Right wing commentators were unsure how to respond to the egging, with Andrew Bolt calling for all eggs to be banned import into Australia until authorities can crack any further extremists; while Miranda Devine urged for calm and rational debate around egg ownership and control in Australia. “Many responsible Australians own and operate eggs safely, so we can’t blame this attack on one bad… egg.”

Oxford Dictionary names “Oh Fuck” Word of the Year
This is the Chaser's halfbaked plan to stay solvent
The Chaser is editorially independent, our stories are free from the influence of billionaires (unless they want to give us $100 - then we’ll print whatever they like). Unlike many others we haven’t put up a paywall because we know you wouldn’t pay for this garbage. But the revenue we get from advertising is falling, so we'd love it if you could throw us a few bucks to help us keep our writers alive.
Support The Chaser
Already a supporter? Click here to never see this again!
Do NOT follow this link or you will be banned from the site!