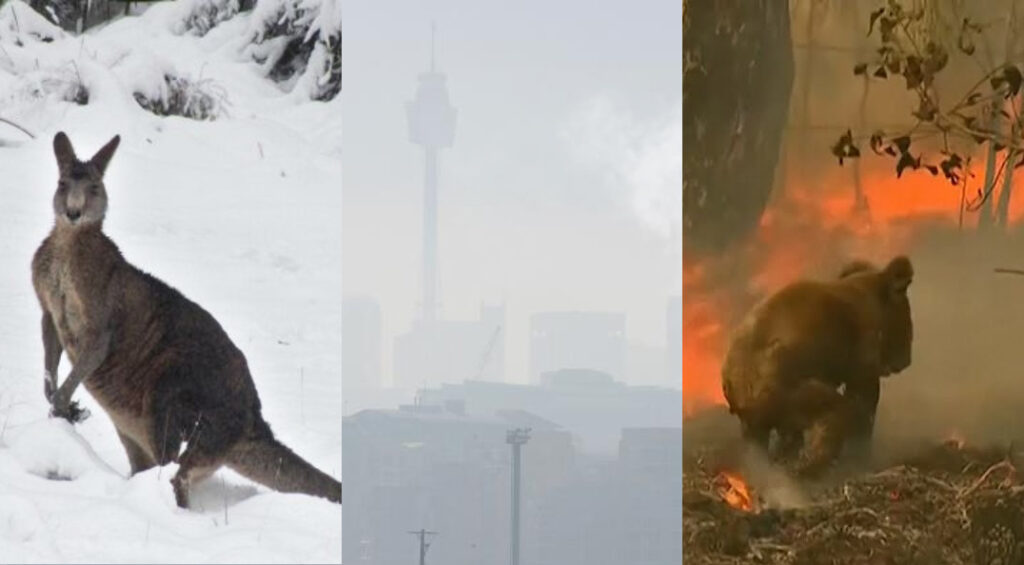 Everything is fine and normal today, as Australia enjoyed another pleasant day of light fog, the occasional state-sized campfire, and a bit of light Christmasy summer snow, according to a new report compiled by experts from Chevron, BP and ExxonMobil.

“The world has never been so normal,” read the report released by Chevron scientists today, and shared with every minister in Parliament over a 4 hour expenses paid lunch. “The dams are half full, water restrictions are heading towards the very common stage 3 levels, the arctic is still very much frozen, and the dangerous glaciers have finally been destroyed by our benevolent emissions. What’s more Kangaroos are hopping through their normal snowy habitats, koalas are at their regular functionally extinct levels, the barrier reef is as white as it always was and Sydney is completely on fire, as per usual. Just ask any farmer right now, things are great!”

“The number of insects is also perfectly normal,” the report continued, “and everybody is seeing bogong moths and Christmas beetles just like they always did.”

“Everything is perfectly normal, and everyone is happy, but don’t let that fool you, the world is under dire threat,” continued the report. “Yes we must never let ourselves grow complacent about the horrible, life destroying threat of anti-pollution activist, who would kill millions with their calls for ‘reduced oil consumption’ and ‘breathable air’.”

“How will struggling, hard working single parents like Gina Rineheart put food on the table for their children if laws that seek to tax the people who are destroying the world slightly more are allowed to be passed, such as the evil carbon tax? And think of the impact on the lives of everyday people if they’re forced to pay slightly more for electricity in order to avoid constant raging bushfires making the air unbreathable. This isn’t communist Russia for gods sake.”

Experts for the CSIRO have reputed the report, pointing out that literally none of this is true, leading the government to slash its funding by half and accuse the organisation of institutional bias