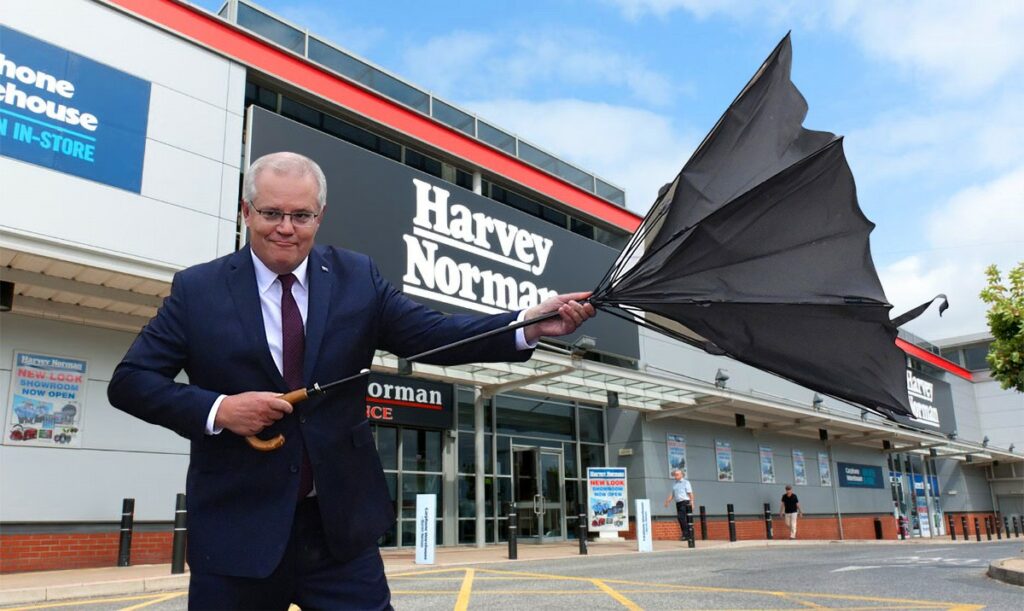 Part time Prime Minister Scott Morrison has today taken time off from his busy schedule of cooking barramundi and not holding hoses, in order to inform the public that they’re on their own when it comes to dealing with Cyclone Seth. “We can’t keep bailing the public out every time their houses go under water,” explained Morrison while being fed hand peeled grapes from his tanning bed. “At some point you’re all just going to have to grow up and take some personal responsibility for your own helicopter evacuations.”

Asked whether he might consider at least sending in the SES using government money, Morrison explained that people can’t keep expecting to get emergency relief for free. “Mate the government isn’t made of money,” explained Morrison while booking a helicopter to take him to the shops. “Plus if we go paying for Cyclone relief, have you ever considered the devastating effect that might have on Kayaks’R’Us? Not to mention the fact that Harvey Norman has just order 12 million rain jackets that they really need to sell.”

“Besides, if the tests are paid for with your tax dollars then you pay for it anyway,” explained Morrison. “I’d much rather see that money being spent on more important things, like helping Rupert Murdoch buy another yacht.”

However, not everyone was convinced, with one voter currently trapped under the rubble of their collapsed house stating that they can’t actually afford to hire someone to come dig them out. “Yea have you seen the prices of rescue teams at the moment?” he asked. “My god, I’ll have to go without avocado toast for months if I want to afford that!”