National
Chaser to close shop after Abbott given Order of Australia for Indigenous work
June 7, 2020 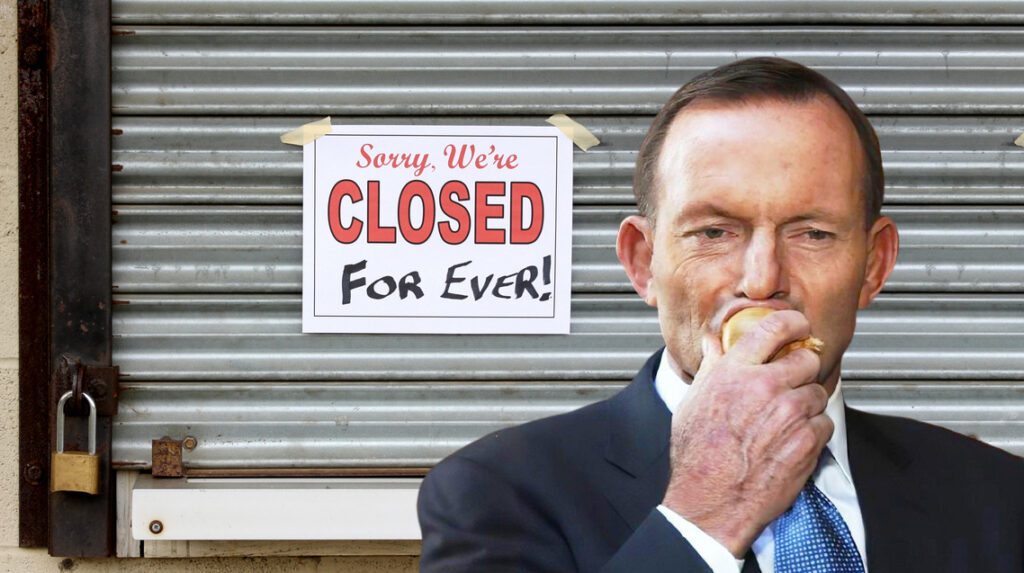 International satire publication and narcotics manufacturing conglomerate Chaser Corporation has today announced they will be ceasing trading, with the demand for fake sounding news having completely dried up since the beginning of 2020.

“Yea look, it’s been a tough year for everyone in the media, but satire has taken a particularly bad hit,” explained managing editor and janitor Charles Firth. “First there was the US President suggesting we inject people with bleach, then we had the Black Mirror creator announcing the show would no longer go ahead because it was too close to reality, and now this week alone we’ve had police brutalising people protesting police brutality, Boris Johnson begging europeans to come back to Britain, and now Tony Abbott is being added to the Order of Australia for Border Control and services to Indigenous communities. Clearly we’re no longer needed here.”

Asked how he felt about the Chaser’s closure, Abbott said it was a sad day for the country. “Obviously I’m the Chaser’s number one fan, and I’ve been trying to imitate them with everything I did in government,” explained Abbott. “From the time I knighted a Prince, to the time I said I was the suppository of all wisdom, to the time I take that big old bite out of a raw onion on camera for seemingly no reason, I’ve really been striving to hit that perfect note where you can’t tell whether you’re watching a comedy programme or the news.”

Asked what they will be doing with their time now, members of the Chaser troupe said they will be looking forward to dedicating more time toward their second passion in running the Order of Australia Selection committee. “We’ve got a great prank lined up there,” explained one of the interchangable white men. “It involves Bronwyn Bishop and a OA for services to the transport industry. You’re gonna love it!”

Want to keep up to date with all the real news that sounds like it could be a Chaser headline? We’ve started a new website called The Shot to bring you all the weirdest news stories of the week. Go give it a follow on Facebook and Twitter, or check it out at theShot.net.au