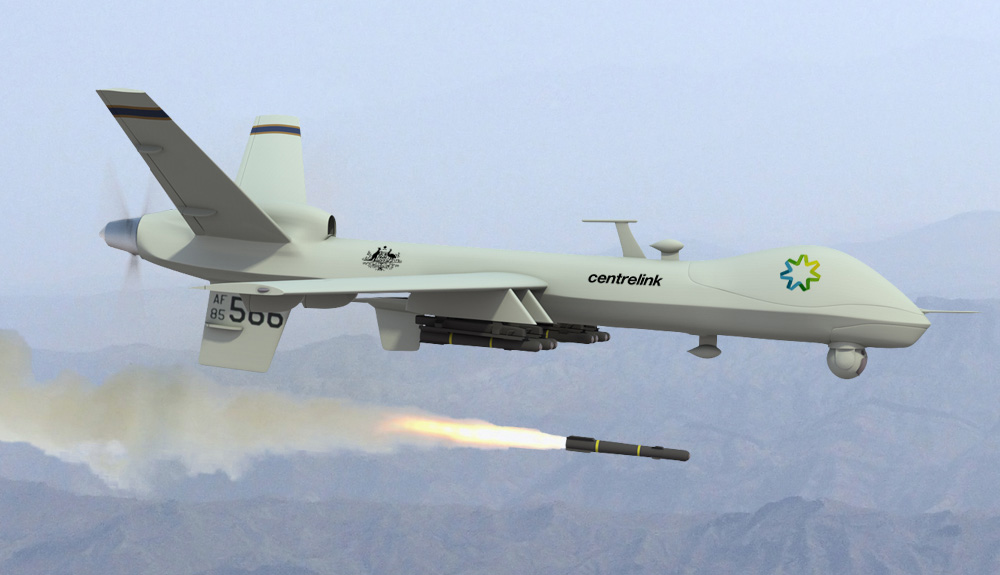 The Australian Government has today revealed their latest weapon in the fight against Centrelink fraud, unveiling a fleet of unmanned aerial drones that will be deployed to target and destroy anyone suspected of owing money to the Department of Human Services.

“We are very pleased to announce today that we have already wracked up our first kill,” announced Minister for Government Services Stuart Robert, “after the automated AI determined local retiree Doris Whipple had failed to declare an overpayment of $23 in 2010, the system automatically sprung to effect, tracking the assailant down to a local park and terminating her before she could wrack up any more debt.”

“Admittedly, on review that $23 was just a rounding error by the ATO, but it’s good to see the system is working as intended.”

Asked whether the program would be extended to politicians who have falsely claimed hundreds of thousands of dollars in travel entitlements, Minister Robert laughed, and explained that those debts were very different, and it would be cruel to punish honest hardworking politicians for a simple mistake like chartering a helicopter or taking an expenses paid family holiday. “Those debts are good debts,” explained the Minister, “and anyone saying otherwise can expect to be raided within the week.”

However, not everyone is a fan of the scheme to kill poor people for possibly owing the government money, with the United Nation’s human rights commission calling the targeted killing of Australia’s most vulnerable a “concerning development” that they will be monitoring closely. “This is quite possibly the worst breach of human rights we’ve seen by Australia since that guy killed himself in one of their offshore concentration camps last week,” announced the agency. “As such we will be issuing our strongest condemnation of a harshly worded letter, and just to show how serious we are, Scott Morrison will not be invited to our next birthday party if he keeps up these flagrant human rights violations.”

Likewise the United States has condemned the move, describing the illegal targeted killings of innocent civilians by unmanned drones as “our idea, they stole it from us.”