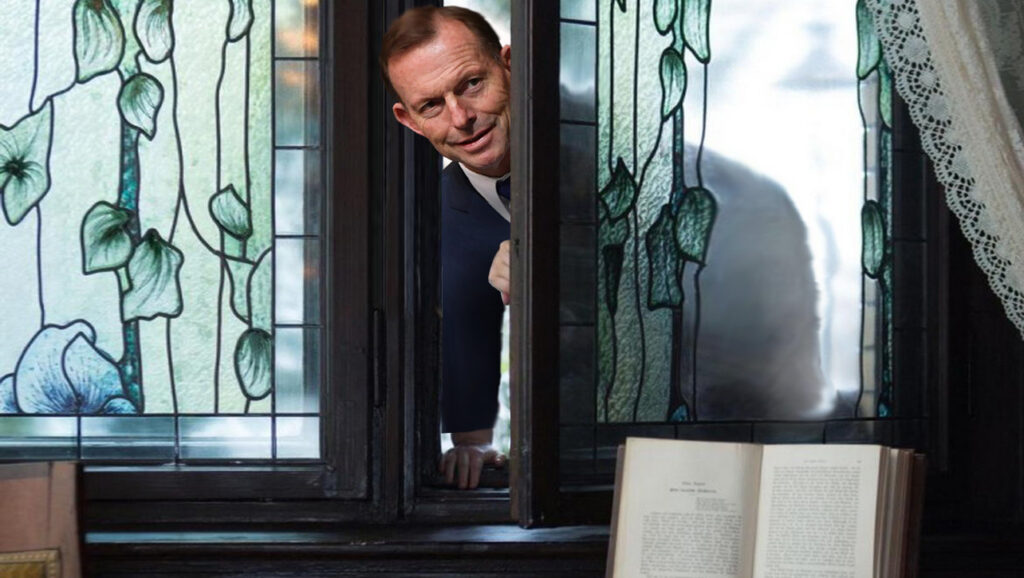 Former Prime Minister and prominent ‘No’ vote campaigner Tony Abbott has today graciously accepted defeat following the national plebiscite into same-sex marriage, by breaking into Government house and holding the governor’s official seal ransom until the Governor promises not to legalise any gay weddings.

Rolling around on the floor with tears rolling down his face, the former Rhodes scholar was seen screaming “It’s not fair” at the Governor General, before accusing him of “ruining everything” and locking himself in the bathroom.

“It’s God’s will that I ignore the wishes of my electorate who voted me into parliament!” sobbed Mr Abbott through the door as Prime Minister Turnbull tried to coax him out with the promise of communion biscuits and a keg of wine. “And I don’t want to be forced to wear a dress and marry a man!”

Eventually leaving the bathroom after Deputy Leader Julie Bishop threatened to take away his travel allowance, Mr Abbott apologised for the tantrum, blaming his sister for the outburst. “She just really knows how to push my buttons, she’s always bullying me, you know?” said Abbott. “In fact the only reason I even opposed same-sex marriage is to get back at her for the time she smashed my lego castle, when I’d just got the scene of me knighting the Queen just right.”

Mr Abbott was then carried out of the Governor’s mansion by his political love-parents John Howard and Bronywn Bishop, who promised him a nice raw onion to chew on if he behaved on the way home.