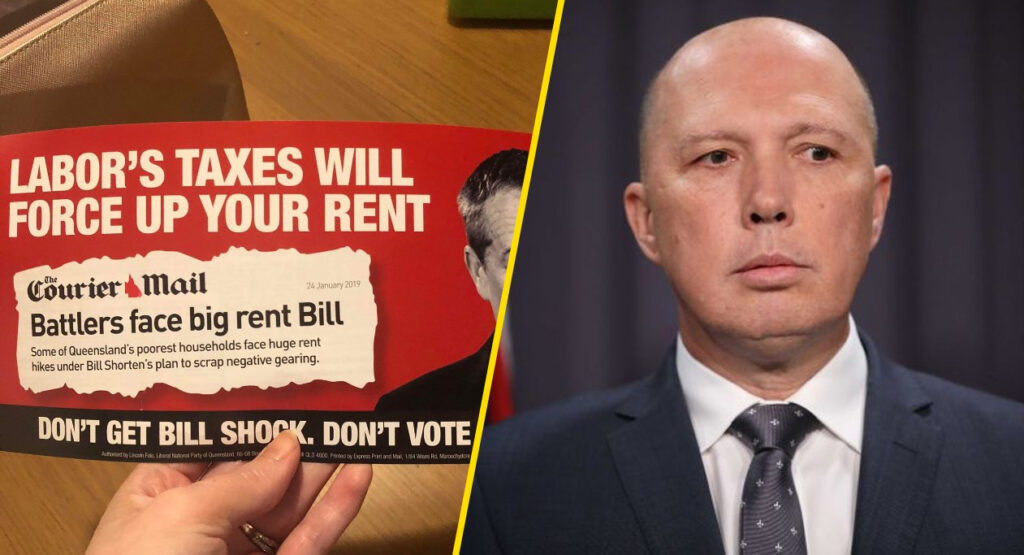 Voters across Peter Dutton’s electorate have been terrified this week, following a mailout campaign which tricked the public into thinking their rent had been increased. The confusing envelopes labelled “Final Notice Rent Increase” were just the latest genius tactical move by the Morrison government, who were sure fake rent increases are a great way to win over voters hearts and minds.

“Some people have accused us of scare tactics, but rest assured we can 100% guarantee rents will go up under Labor,” explained minister and part time McCains model Peter Dutton this afternoon. “I know this, because as the owner of multiple investment properties, I will be personally be the one increasing the rent.”

Asked why scrapping negative gearing is such a bad thing, Minister for Industry and owner of 10 homes Karen Andrews said that it was the wrong time to be proposing such measures. “You see, if Labor gets into power and scraps negative gearing, house prices will go down, which means millenials will be forced to buy homes of their own instead of renting for the rest of their lives. This is a very bad thing.”

“However, if we the Liberals win, we promise to keep negative gearing, and house prices will go up forever, which is a great thing for millennials because it means they can keep paying low rents forever instead of buying a house, just like they always dreamed.”

“The only problem is millenials have stopped buying houses for some reason, which is killing the housing industry. Really makes you wish they’d stop wasting all that money on rent.”

Sick of Murdoch but don’t want to spend a week on the phone? Cancel your News Corp subscription online, courtesy of the Chaser!
If you enjoyed this article, consider becoming a contributor to the Chaser Beer Fund. For just $1 a month you can help us employ 20 more interns. DONATE NOW