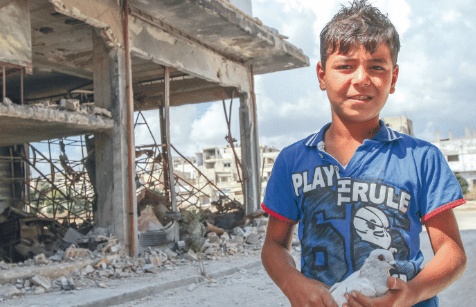 A young boy outside his house in Aleppo. His parents won't let him play inside "because it might fall in."

In the past five years, 5000 schools across Syria have been closed or destroyed by the civil war. Millions have been forced out of education. But the real tragedy is what awaits Syria’s children back at home. For some reason, parents are highly neurotic about their children’s safety. Agathe Zeublouze, a doctor from Médecins Sans Frontières, who spoke to me on the
condition of anonymity, agrees.


“Syrian parents are so neurotic,” she says, “They are always saying ‘be careful about this’, ‘don’t go there’, ‘don’t touch that ordinance’ and the result is that they’ve created a generation who are too fearful to take any risks themselves. These kids are walking around on eggshells as if they were afraid of stepping on land mines or being shot by a sniper.”

While some say that parents are right to be concerned about the dangers of modern life, most psychologists disagree.

“They’re creating a generation of the emotionally stunted,” Dr Zeublouze told me. “They’ve all got parents who drill into them that the world is a dangerous place. That’s no way to be brought up. What happens when something really bad happens to them?”

“They come into the hospital, anxious, lonely and depressed, and they’ll say they don’t feel safe in this hostile environment. I try and get them to lie down on the couch and do some dynamic therapy, but instead they just try and hide under it.”

Later, when talking to a family sheltering in an olive grove (ahead of fleeing through the night into Turkey) my suggestion that their kids needed to develop resilience fell on deaf ears. Of course, this may have been the language barrier or it could have been the Russian Mi-8 chopper flying low overhead. I gesticulated. “Helicopters, see,” they nodded, “And parenting don’t mix.”

Frustrated at the sea of blank stares I tried again “How are your kids going be well-adjusted adults when you keep trying
to shield them from the real world?”

“If they reach adulthood we’ll be FUCKING ecstatic,” a man screamed at me. I let them leave as despair sets in. What hope do Syria’s mollycoddled youngsters have against the stranglehold of this 21st century parenting fad?

This article originally appeared in The Chaser’s Official Guide to Bad Parenting (CQ#7): buy it here.

Australians to be killed and turned into ‘Hamilton’ tickets, admits Treasurer

Morrison defends airport overspending saying he “paid mates rates”
This is the Chaser's halfbaked plan to stay solvent
The Chaser is editorially independent, our stories are free from the influence of billionaires (unless they want to give us $100 - then we’ll print whatever they like). Unlike many others we haven’t put up a paywall because we know you wouldn’t pay for this garbage. But the revenue we get from advertising is falling, so we'd love it if you could throw us a few bucks to help us keep our writers alive.
Support The Chaser
Already a supporter? Click here to never see this again!
Do NOT follow this link or you will be banned from the site!