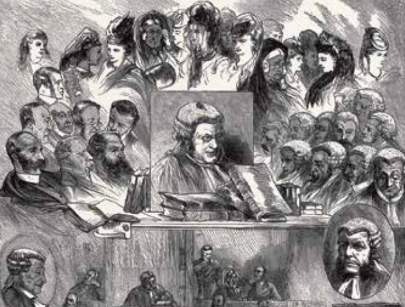 For tens of thousands of years, Australia’s indigenous peoples practiced their own forms of justice, according to their own concepts of law. Across the breadth of the continent, different legal traditions and concepts flourished, honed and refined over millennia. Many of these customs survive to the present day, and continue to inform the lives of indigenous Australians.

Or, if you’re a conservative, Australia’s legal history began in 1788 with the arrival of the First Fleet.

Australia has a long and proud legal tradition, which represents the finest ideals of our nation. From the earliest days of British colonisation, when governors were vested with almost dictatorial powers to do as they liked, through to the establishment of the first courts which boldly blazed new trails by doing whatever English courts already did, to the present day with our extremely patriotic rates of indigenous over-incarceration.

In the 21st century, the justice system has kept pace with modern mores. Visit any courthouse in the nation and you will see highly trained professionals putting on robes like they’re Harry Potter extras. If you’re especially lucky, you might even get a glimpse of a portly middle-aged man,in a curly wig, berating a rape victim for drinking too much, while a room full of people watches on silently.

Going to Court
Navigating the legal system can be challenging from the outside. There are many tricky and overly technical terms such as writs of summons, forum non conveniens and guilty. To help with this problem, many people choose to retain the services of a lawyer, who is essentially someone you pay to break bad news to you.

Lawyers in Australia are divided between solicitors and barristers. One of them does the work outside of court while the other does the work on their tax planning. Then they might employ even more people like a Senior Counsel. This is sometimes called a Queen’s Counsel, because some Liberal Party politicians still have delusions that Australia is still part of the Mother Country.

A Senior Counsel is sometimes referred to as a silk because of their silky soft skin, which comes from decades of avoiding manual labour.

So now you have all 18 of your lawyers briefed, paid and ready to go. You can sit back and wait several years for the litigation to resolve itself. Justice is served.

Hierarchy of Courts
Here is a list of all of Australia’s courts, from lowest to highest:

This article originally appeared in The Chaser’s Guide to Australia (CQ#4): buy it here.