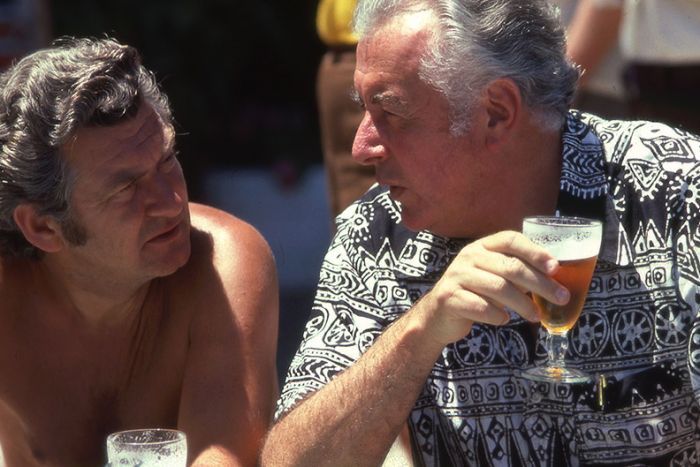 "You got me the last one, I'll get you the next one," said one Prime Minister to the next.

Australian Culture
Australian culture began in 1804 when a convict named James Squire first successfully cultivated hops in Australia. Up until that point, Australians had been importing their culture, but now finally had culture of their own. As you can see from the vomit lining the streets every Sunday morning, Australia has become one of the most cultured countries in the world. This can partly be credited to the fact that Australian culture is so inclusive. For example, if someone at a dinner
party says they can’t have any culture because they’re driving tonight, it’s acceptable to aggressively ask them multiple times, “Are you sure you don’t want some culture tonight?” until they finally relent, much to the disappointment of their partner and children.

As in many cultures, alcohol is used in Australia as a tool for facilitating sexual contact. There are rumours of Australians hooking up without the assistance of alcohol, but these claims have not been substantiated. Not everyone drinks beer,of course, although refusal to drink a cold one can result in a heavy fine.

Underage Culture
As with playing sport, Australians believe it is best to start drinking when you are young. Many Australian parents purchase alcohol for their underage teens as they ‘would rather you drink it in the house’. These parents do this purely to protect their children, and any perception that they now suddenly seem cool to the children is just cream on the top. There are conflicting views on underage drinking.The Australian Drug Foundation, backed by neurological research, says that adolescence is a crucial time for brain development, and that ‘alcohol consumption during this time can bring about learning difficulties,memory problems and other problems later in life’. Most parents, however, reject this evidence-based approach, and believe that the effects of underaged drinking can be countered by doing it ‘in the house’.

Binge drinking
Recent studies showed that some Australians, in spite of the culture, were drinking in moderation. To counteract this, Australians invented binge drinking. Binge drinking refers to the practice of consuming alcohol at a culturally acceptable pace. Government guidelines suggest that drinking more than four standard drinks, on a single occasion, which can lead to alcohol-related injuries and public urination, is fuckin’ ripper. While staying within the limit recommended by health professionals of no more than two standard drinks on any day, is seen as ‘lightweight’. In 2008, the government introduced an alcopop tax in a bid to curb teen binge drinking. Fortunately, a 2013 study concluded that the alcopop tax had failed to work. Fuck yeah! 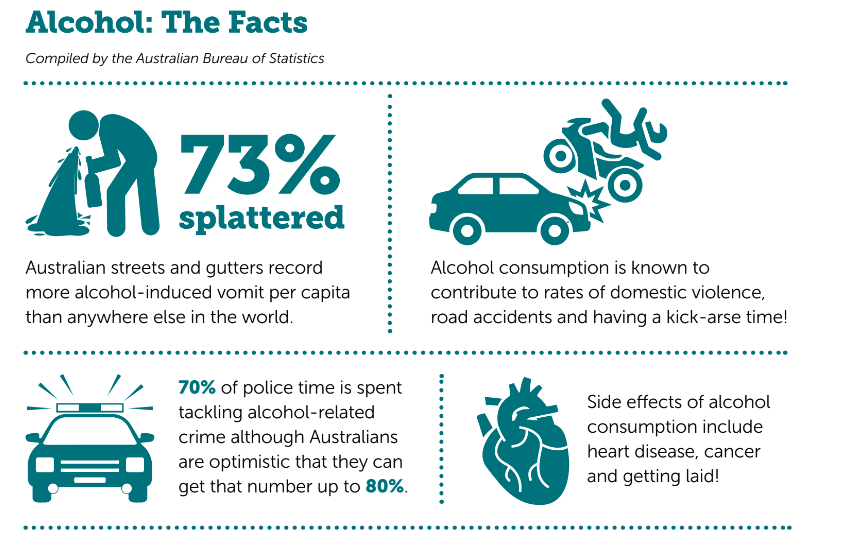 Cask wine
While Australians acknowledge that the cochlear implant and the medical application of penicillin are great Australian inventions, it’s widely acknowledged that the greatest Australian invention is cask wine. Cask or box wine was invented by South Australian winemaker, Thomas Angove, and he’s still yet to receive a sainthood. He got the idea after realising drinking’s a lot more fun when you don’t know how much is left in the bottle, and you lose the ability to set limits for yourself. Cask wine is generally cheaper than bottled wine. Experts aren’t sure exactly why this is, but think it might have something to do with the fact that the wine is in a sack.

Schoolies
For one week each November, Queensland’s Gold Coast is overrun by drunken teenagers, looking to enjoy activities such as Wet ‘n’ Wild and falling from balconies. It is conservatively estimated that 100% of all unwanted pregnancies occur during this week, but schoolies isn’t all just sex and drinking. There’s violence too! Above all, schoolies is a chance to let your hair, and yourself, down.

FUN FACT: Some older men use schoolies as a chance to hang around young, vulnerable, drunken teenagers. These men are referred to colloquially as ‘footy players’.

Drink driving
Drink-driving is one of Australia’s favourite pastimes. Some Australians are foolish enough to drive without drinking, but fortunately, there are enough drink-drivers on Australia’s roads to wipe these people out.

Holiday Road Toll
Much like the State o fOrigin, every public holiday weekend each state competes to see who can have the most drink-driving accidents on their roads.

This article originally appeared in the Chaser’s Australia (CQ#4): buy it here.