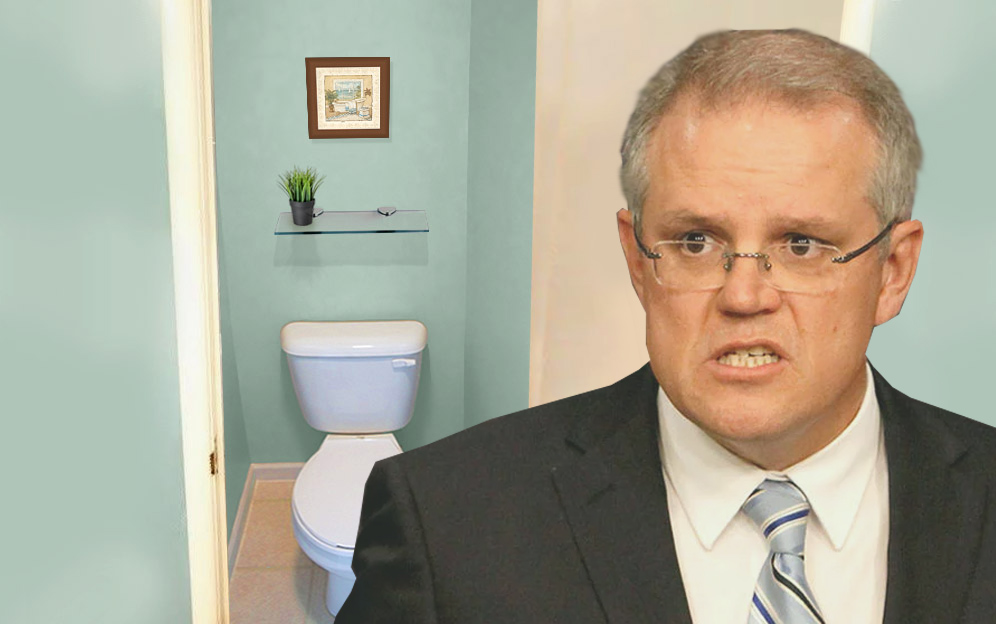 Prime Minister and evangelical Scott Morrison has today used the power vested to him as Prime Minister of the week to issue a proclamation that nobody in his house is allowed to use the unisex toilet adjoining the spare bedroom. Calling the Caroma Uniset liberal propaganda, Mr Morrison warned that anyone caught within five metres of the guest room en-suite would be damned to the fires of an eternal hell.

“It’s just not fair dinkum” Morrison explained to his wife as she urgently hopped back and forth on the balls of her feet. “I’m afraid from now on you’re just going to have to use the women’s bathroom at the park down the road, or hold it in until we visit the mall on Sundays.”

Morrison however was quick to clarify that his stance was in no way related to bigotry against women nor was it linked to his deep-seated hatred of trans people. “I’m simply focusing on the things that matter to fair dinkum everyday working Australian families.” explained Morrison, while frantically checking Chris Ulhman’s twitter to see if he is happy with how the country is being run. “I know that if I were a citizen of this country seeing a growing climate disaster, an economy in recession, a housing crisis, China on the brink of civil war, and our largest military ally being run by an insane geriaric who thinks we should nuke hurricanes, what these people want to see is the Prime Minister of the country addressing the fringe concerns about a sign on a bathroom in parliament house designed to make a minority group feel included. That’s why I’m Prime Minister of this country. That and the fact that the alternative was Peter Dutton.”

“Anyway, gotta run to the MENS bathroom. Wouldn’t want a repeat of Engadine Maccas again, would we?”