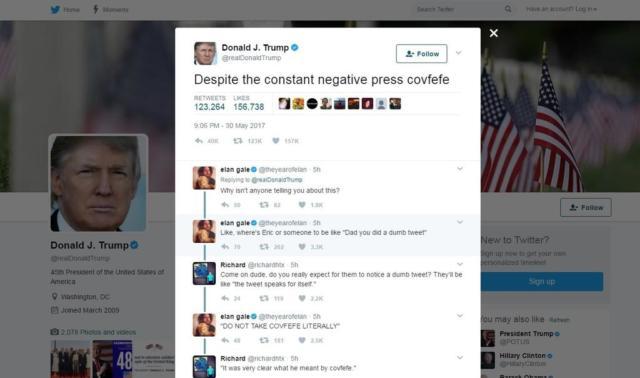 Twitter is the perfect weapon. You can tweet at anyone, and if your takedown is zany enough, people will retweet it and make your enemy feel even more stupid! You should always try to tweet at everybody who has ever wronged you. You can threaten your teachers, friends, high school bullies. No one is safe.

1. Start with punchy nicknames that pack a punch
Whimsical nicknames spread like wildfire. The internet loves labels like ‘Lying Ted’, ‘Goofy Elizabeth Warren’ and ‘Crooked Hillary’. The leftist media will give the names so much airtime just because they can’t believe how immature you are. They do your job for you! Next time you address your foe, try something like ‘Crazy boy Baldwin’, ‘Wackidywack Cooper’ or ‘Cuckboy Sanders’.

2. Discredit your attacker
Once you weaken your nemesis with an embarrassing nick-name, you can really discredit their criticism by pointing out their failures, even if they are unrelated. If someone calls you out for being sexist, simply remind your twitter followers they once lost an election in primary school. If someone says you are an idiot, remind them how hot your wife is. You can also discredit your opponents by pointing out the only reason they insulted you is because they are jealous and have always been out to get you.

3. Blur the ‘truth’
If you don’t like what they have said about you, tweet at them saying it’s fake news. It doesn’t matter what’s true or not. No one cares when you’re a winner.

4. Send it off with a snappy ending
You can do so much damage in 140 characters. The best way to end off a tweet is with a simple value judgement like ‘Sad!’, ‘Bad!’ Or ‘Shame!’ It is impossible to come back with anything when you end on such a strong point. The lower you blow, the more you force your foe to go low with you. So go low, create a tweet that is the equivalent to a punch in the balls.

This article originally appeared in The Chaser’s America (CQ6): buy it here.