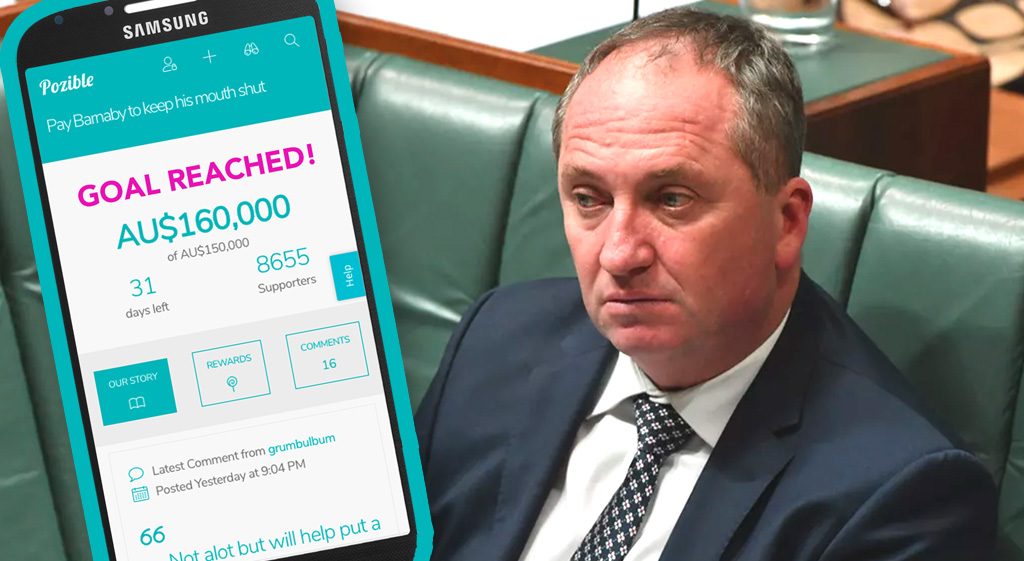 A crowdfunding campaign organised this week in order to pay Barnaby Joyce $160,000 to not talk about his sex life on national TV has been declared a stunning success, with the Pozible campaign reaching its fundraising goal within just an hour of launching. Although only originally intended to raise $160,000 – the amount required to outbid Seven for their interview fee, organisers now report they have almost tripled that amount, with the public clamouring to do anything they can to keep the former deputy Prime Minister from spilling the beans about his sordid sex life.

“It’s quite extraordinary,” says campaign organiser Monique Waters. “I thought it would take us at least a month to raise that kind of money, but at this rate we’re going to have enough to buy Barnaby’s silence for the rest of his life by the end of the week, with enough left over to begin research into ways to wipe the public’s memory entirely so they can forget this affair ever happened. It really brings a tear to my eye, thinking about that horrid sweaty sack of tomatoes bonking away like that.”

Asked why he was so quick to throw money at the campaign, major donor Andy Johnson says he felt it was his civic duty to donate to the cause. “I’ve been saving up for years to afford an extension out the back of the house,” says Johnson, “but when I heard about this campaign, I knew it just wasn’t something I could turn a blind eye to. Sure giving $10,000 out of my savings might have put a dent in my dreams, but it’s a small price to pay to put a stop to so much suffering and illness that tales of Barnaby’s filthy office-table sex romps would have caused.”

However, experts have warned that fundraising the money may have the opposite effect intended, with many more politicians now considering coming out about their sex lives in order to secure lucrative non-disclosure payouts from the public. “It’s been an absolute nightmare, the dam has well and truly opened,” reports political journalist Annabel Crabb. “Just this morning alone I’ve had Kevin Andrews on the phone offering to give all the saucy details about that one time he had sex with his wife for non-reproductive purposes after overdoing the sacramental wine, Jackie Lambie hasn’t stopped calling to spill all about how ‘well hung’ her last three tinder dates were, and Cory Bernardi has just now forwarded on an email about his last man-on-man dalliance in the parliamentary bathroom. I don’t think that one was intentional though, he’s accidentally CC’d in the whole parliament again.”