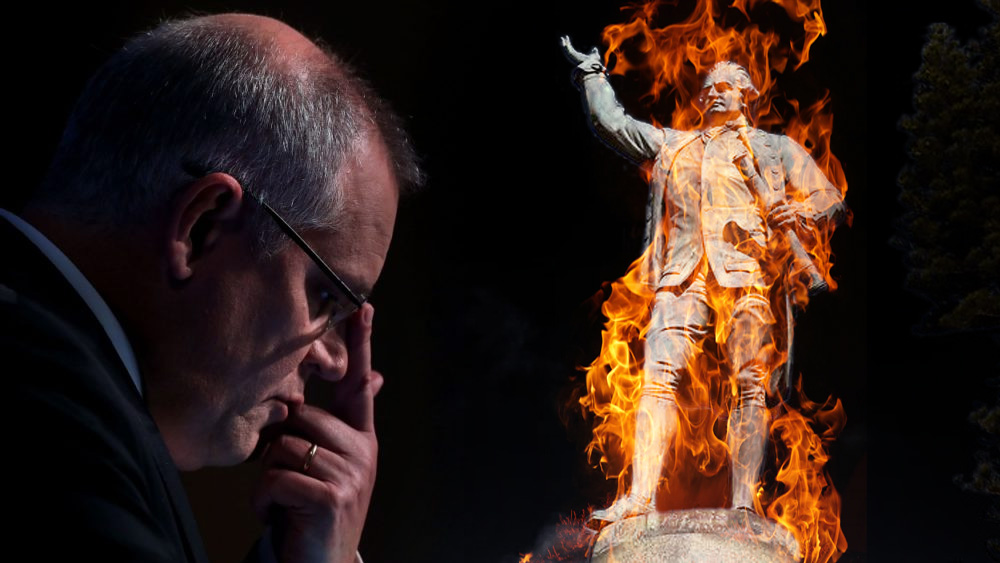 Prime Minister Scott Morrison has today been arrested by police for attempting to destroy a statue of captain cook, after learning about Australia’s long history of colonialism and slavery.

“Wait, what do you mean we weren’t the good guys?” asked a shocked Morrison today while leafing through a history book. “Are you seriously telling me there were people living here and we just forced them to leave their homes, separated children from parents, and gave them all smallpox in an attempt to wipe them out? Jesus Christ, why is nobody talking about this? This is an outrage!”

Morrison has responded to the news by declaring that all Black Lives Matters protests are back on, and he will be front and centre of the next march, carrying with him the heads of any coloniser’s statue that still stands. “God, I thought coronavirus was the biggest issue of our time, but did you know one third of women in prisons across NSW are aboriginal despite making up only 3% of the population? Virus or not, somebody has to take a stand against this injustice!”

Morrison has reportedly also fired all his advisers tonight, in payback for having suggested he give Tony Abbott an AO for Indigenous services. “Look at the time I thought it was acceptable, after all Tony always seemed like a top bloke, but having read some of the stuff he said about colonisation, gosh I’m just stumped about how someone could be so tone deaf,” explained Morrison. “I mean, the guy said the first fleet was good for our indigenous people, and that the country was nothing but bush before they arrived. How anybody could think a population that has suffered so much could in any way feel grateful for having their homes, customs, culture, and children taken from them, I’ll never understand.”

“We have to make this right,” continued Morrison. “And rest assured removing these statues glorifying foreign invaders will only be the first step in my quest to close the gap, defund the police, and to make amends with our nation’s true owners who have suffered needlessly for too long. Today I’m proud to say Black Lives Matter. I’ll see you at the march.”