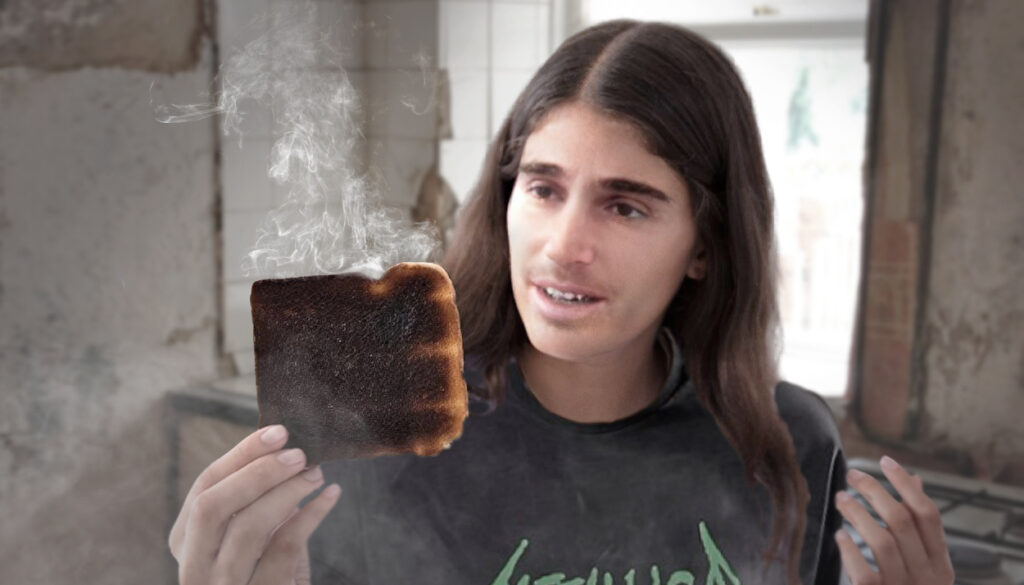 Local metalhead and part time shelf packer Mark Mitchell has today bitten down on the blackened husk of his broken fast, dropping salted tears of sorrow at the devestation that lies before his very eyes, after accidentally burning his breakfast.

The incident, which saw the entire sharehouse woken by the smoke alarm at the ungodly hour of 1pm, is believed to have occurred after metal fanatic Mark decided to amp up his cheese and ham sandwich to stratospheric new levels by setting the toaster all the way to 11. “Yea man, now we’re cooking with fire!” Mark nodded to himself as smoke began billowing from the toaster. “Oh, wait shit, no it’s actually on fire! What’s the number for 911!?”

Surveying the charred remains of his breakfast, Mark is said to be extremely pleased with the outcome. “Yea it’s black and charred, but that’s just how I like it. Having that burnt husk inside me is no different to my black and charred heart that burns in my chest charred by a thousand flaming arrows from cupids cursed bow. Oh wait actually I’ve still got some pop-tarts left, I’ll just eat those.”