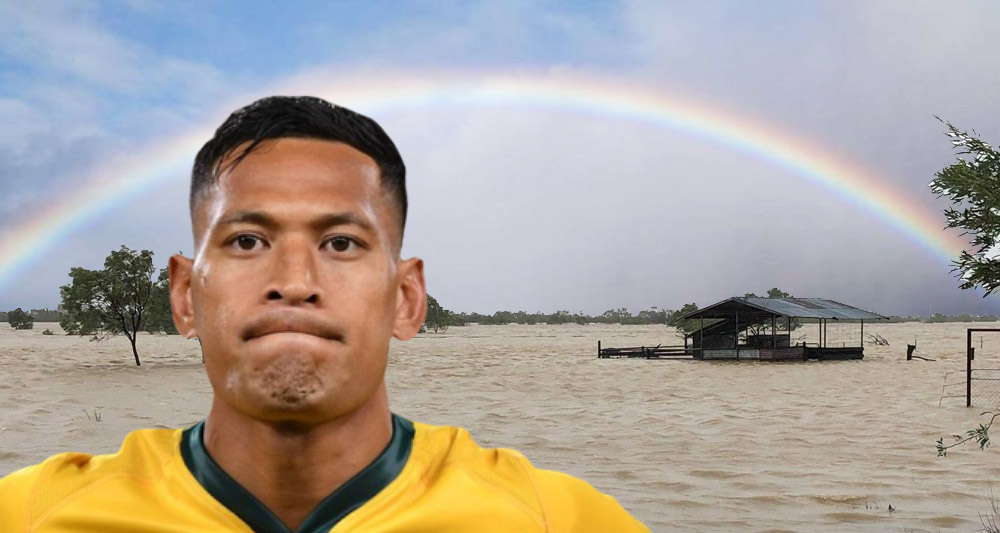 Infamous football star and Australia’s leading character-comedian Israel Folau has today reserved his right not to comment on the floods affecting New South Wales, after he was unsure whether to condemn the floods or thank God for them. “Look, on the one hand it’s my natural instinct to blame natural disasters on the gays,” explained Folau. “But then I remembered how God always likes causing a good flood every now and again, so I decided to just tap this one out.”

The appearance of a rainbow over the floods has only served to further the confusion, with both gays and Christians using it as a sign to claim credit for the disaster. “Frankly I’m as confused as everyone,” explained a local reverend when looking out over the disaster. “Is this God being nice to us and putting out the fire, or God punishing us for gay marriage by putting out the gay marriage fires? I really wish he’d just learn to use email already. Nobody communicates through floods these days.”

The news of Folau’s reluctance to comment has disappointed fans on his standup routine, who have recently flocked to his weekly Sunday gig to see him make such outlandish claims as “Gay marriage started the bushfires” in a hilarious lampoon of a conservative Christian who has taken his believes beyond all logic in order to justify his hate. “It was always a great bit, to see him get up there and satirise the kind of Christians that completely ignore Jesus’s teachings,” explained one fan. “I especially liked the time he pretended to give up a multi-million dollar sports deal so he could post bible quotes to Instagram, I mean can you imagine real Christians being worried about having millions of dollars to help the poor and needy? He really nailed that one.”

However, when contacted for comment, God said the floods were not his work, and in fact were the result of an increasingly erratic climate. “Earth, oh no I haven’t visited there for years,” explained God. “Goodness no, I tapped out of there around two thousand years ago after I realised what a mess the place was. I had my friend Buddah take over day to day management of that sector of the universe. Talk to him if you want answers.”