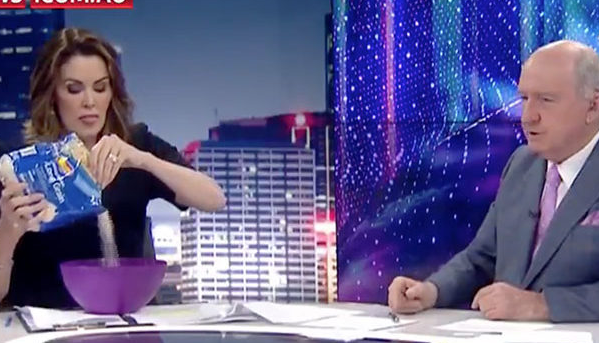 Sky News presenters and avid amateur science communicators Peta Credlin and Alan Jones have today performed another bulletproof  TV science experiment, pouring out an entire bowl of rice to demonstrate how many scientists have officially gone on the record to disagree with their claim that climate change is a hoax.

Earlier today, 11,000 scientists took a break from their usual schedule of hatching Machiavellian plans whilst yacht partying in Ibiza to sign a declaration stating that the world is facing a climate emergency.

Jones and Credlin had previously used a similar experiment to demonstrate the alleged minuscule contribution Australia makes to global carbon emissions, which they used as a justification for Australia to no longer participate in carbon reduction efforts.

In their latest effort, Jones had Credlin count out the 11,000 grains on live air, muttering under his breath as she held up each grain to the camera before placing it in the bowl.

Once the bowl was full, he then placed two individual grains next to it on the desk.

“Now, who are you going to believe?” he asked his viewers. “This bowl full of 11,000 self-centred, profit-driven, corporate-sponsored narcissists pushing a biased, thinly veiled agenda?”

“Or these two well-informed, independent, subject matter experts – aka Peta and myself?”

“The choice is, of course, simple.”

“Now Peta, be a good girl and clean this mess up for me.”