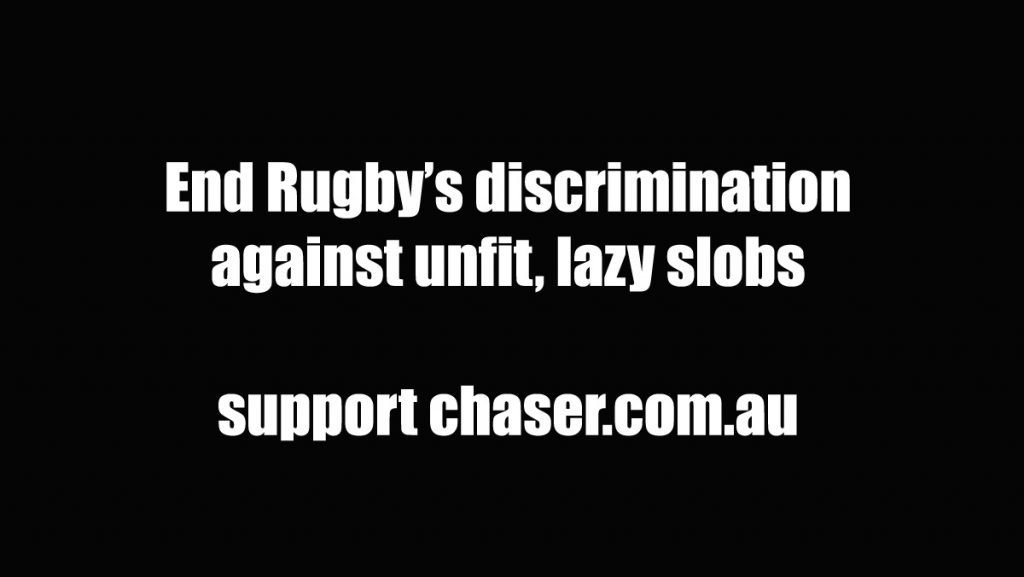 Our name is Chaser.com.au and, until recently, we didn’t realise you could make money by being banned from playing Rugby.

In the last 20 years, we have had the honour and the privilege of never having to run around with a ball on a grass field while being paid millions of dollars to do so, on the single condition that we not say mean things about minorities, which actually now that we think about it, sounds like it would be a pretty sweet deal.

But we, like certain football players, believe in a higher power, one that can cure the sick, feed the poor, and gold plate our toilets. We are, of course, talking about the all mighty dollar.

Earlier this year, we uploaded a call for public donations to our website to help fight our battle with our evil ‘writers’ who have been demanding ‘compensation for their labor’ like some kind of union thugs.

Sadly, thanks to what we can only assume is extreme discrimination, Rugby Australia has told us we will never be paid to play professional rugby in this country, simply because we are in no way qualified for the role. So instead, we are asking for you, the public, to hand over money to make up for the millions of dollars we’ll never be able to make kicking a ball around.

I want to support Chaser.com.au to fund their lazy website satire:

– because I mistakenly believe the money will be going to those funny guys from TV, and not the team of hideous basement dwelling website writers who were too ugly to make the jump to TV
– because I’d rather give my money to a bunch of undergraduate hacks than see a single dollar go to that guy who is whinging about being discriminated against because he refused to comply by the anti-discrimination clause in his workplace contract
– because I believe I can fly
– because I believe I can touch the sky

In making this contribution I acknowledge that my contributions are made freely as a gift and that there is a very real chance the money will be entirely spent on beer. You agree that there will be no obligations on The Chaser to do anything for me in recognition of the gift or to apply the funds in any particular way and that in fact, if anything the Chaser will probably use the money to do things that will personally annoy me and make me regret I ever gave them the money.