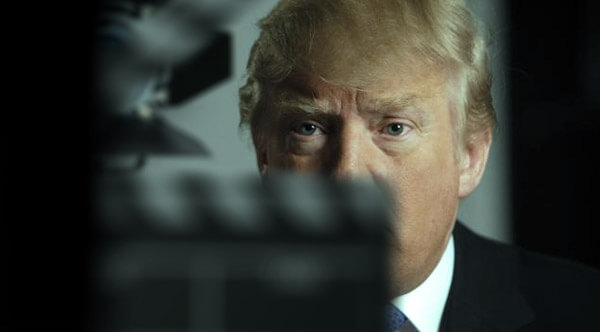 Actor Leonard Jost has been playing the character Donald J Trump since the announcement of his Presidential campaign a year ago.

I met with Leonard in a quaint Brooklyn food co-op on a Saturday morning in October. We had agreed to meet late: he had of course had a busy week and the implication was he needed the sleep in.

When he eventually arrived it took me a while to recognise him, but at the same time he has a gate that is undeniably idiosyncratic. Without the characteristic tan panda makeup we all now know so well, underneath Leonard fits the build of any struggling actor you might pass on the street. He walks with a stoop and avoids eye contact. He is good looking but dresses in yesterday’s tshirt and jeans. Ray Ban glasses and a three o’clock shadow subtly hide a face that is both exhausted and intrigued by the world at the same time.

Even when our coffee arrived (Colombian espresso for him), he swilled his mouth and scrunched his face in dissatisfaction but kept drinking all the same. “Make sure you tip well. Most of these guys are actors.”

And Leonard knows a thing or two about the struggles of an out of work actor. Before landing the role of a lifetime just over a year ago, he was basically an unknown to anybody outside the Broadway circuit, despite appearing in plays and minor film and TV roles for the best part of thirty years. 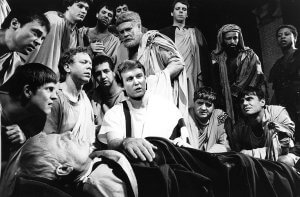 Jost starred in a 1987 production of Julius Caesar with Al Pacino and Martin Sheen.

“When I get a new script under my hotel door each night there’s always a moment of trepidation. Can I really do this? Are we crossing the line?”

Born in rural Minnesota, art was always an essential escape for Leonard, He left home for Hollywood at eighteen, much to the objections of his accountant mother and police chief father. I ask him what they think of his choice now.

“I still don’t speak to them often. They probably aren’t proud of where the path has led me I guess. Not many parents would dream of a future like this.”

There’s a sadness on the fringe of every response he gives. And it is understandable. Even for an actor, a character like fictional billionaire businessman politician Donald J Trump isn’t exactly a role with a lot of honour.

Despite this, Leonard is neck deep in what many critics are calling the performance of the new century. It’s even arguable that not since the days of Orson Welles in Citizen Kane has there been this amount of public attention, affection and outrage at such a single powerhouse performance.

But Leonard doesn’t like the comparisons to Hollywood’s golden age Enfant terrible. He rolls his eyes when I mention it.

“Things didn’t work out too well for Orson.”

I remind him that we are still talking about him eighty years later while drinking shitty coffee.

Leonard smiles. “That’s true. But he’s not here with us, is he?”

A comment like that underlines the cynicism and transience that Jost apples to his every day life. Maybe it’s a coping mechanism; a healthy balance of grit in his days that are otherwise filled with the absurdity and buffoonery of embodying such a ridiculous character as Trump.

But the silliness of the performance doesn’t bother him. In fact he is generous in his praise of the current writing team behind the character, led by Orange is the New Black show runner Jenji Kohan.

“When I get a new script under my hotel door each night there’s always a moment of trepidation. Can I really do this? Are we crossing the line? But the team of writers behind this character is so strong that at some point you just got to let go and trust their judgement. And it always works out.”

But accepting the role of Trump isn’t without its career consequences. Many actors have stated publicly that the work is increasingly silly and populist, most notably method actor Edward Norton who in Esquire last month called Jost’s performance “bawdy and ridiculous”.

Jost shrugs that kind of criticism off. “Well it’s not Mamet I’ll admit. But Trump was never meant to be realistic. Maybe Ed should realise there’s scope for other more stylistic forms of art out there. We wouldn’t even be having this conversation in Europe.”

As our açaí bowls arrive Leonard hushes and contemplates for a moment. It must be strange for him to sit here in apparent normalcy on a Saturday morning when his life has been so uprooted for this year-long election campaign. That’s longer than any press tour for an actor I’ve heard of. The seemingly endless cross country travels to campaign rallies, debates, media events and interviews must be exhausting, let alone the fact that he has to spend all that time deep in character.

And you can see this weight pulling down behind his eyes. Cupped delicately in his palms, his coffee is now the subject of a glazed thousand yard stare. I get the sense that while in the role of Trump for this past year, Leonard has seen things. He has been places in his mind that we can only imagine.

I ask him about this cost and he shrugs it off.

“I’m just lucky to be working. I try not to think about it too much.”

But that must be difficult when in heated Twitter feuds with the nations top journalists.

“Well I just follow the script. And at the end of the day I try to remind myself that the character disappears with the costume.”

The idea of worldwide fame seems to amuse Leonard, which is strange considering taking on a role like Donald J Trump involves daily (almost hourly) headline attention from media on both the left and right.

For some reason I don’t quite buy his faux shyness, so I pry a little further and ask him why. Why do this? Why sacrifice so much of his life to something that he is trying to persuade me means nothing to him?

Luckily he doesn’t take offence to my challenge. “Oh it means a lot to me. But that’s the point. I don’t do it for anybody else. I do it for me. Like it or hate it, I don’t give a f***. It’s a reason to wake up in the morning.”

He’s got me there. I can’t argue with him. At the end of the day that’s all this is; the politics, the arguments, the constant white noise of 24 hour news. For Leonard, like for all of us, these distractions do little to help make sense of this mess we call life. When the lights are doused, when the debates are over, when the teleprompters scroll blank and yesterday’s front pages are archived, there is no conclusion. There is no resolution. And yet we will try again tomorrow. What else is there to do?

It’s all a just reason to get up in the morning.

Leonard Jost will be playing Donald Trump in the Republican Party’s nomination for President until November 8. Tickets are sold out.